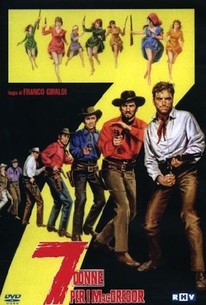 Up the MacGregors Photos

This Latin western comedy chronicles the epic saga of the MacGregors, a Scottish clan of ranchers living on the Mexican border, who are in conflict with the local crooked sheriff, the local horse salesman, and a gang of banditos. The trouble begins when the horse trader tries to bilk them on a deal. The brothers begin brawling and are tossed in jail. They are eventually released and discover that the outlaws have taken their horses and find out the sheriff is in league with the rogues and will not help. They then set off to catch the thieves themselves. Unfortunately, they end up captured and can only be saved by their bagpipe-playing daddy.

Víctor Israel
as Trevor, the Dentist

Jesus Guzmán
as The Priest

Elena Montoya
as The Child from San Raphael

Critic Reviews for Up the MacGregors

There are no critic reviews yet for Up the MacGregors. Keep checking Rotten Tomatoes for updates!

There are no featured reviews for Up the MacGregors at this time.

Up the MacGregors Quotes