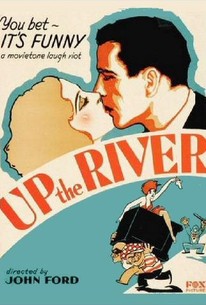 Up the River Photos

The one-time-only combination of director John Ford and actors Spencer Tracy (in his first film) and Humphrey Bogart (in his second) should be recommendation enough for the offbeat comedy-drama Up the River. Tracy and Warren Hymer play Saint Louis and Dannemora Dan, two hard-boiled but likeable prison convicts. While in stir, the boys befriend another convict named Steve (Bogart), who is in love with woman's-prison inmate Judy (Claire Luce). Eventually, Steve and Judy are released, whereupon they get married and head to a small town where no one knows of their criminal pasts. It isn't long, however, before the couple's future happiness is threatened by dishonest salesman Frosby (Gaylord Pendleton), the no-good rat who framed Judy. Frosby threatens to expose Steve's prison record if the latter refuses to go along with a scheme to defraud his neighbors. Learning of this situation, Saint Louis and Dan escape from jail, foil Frosby's scheme, and return behind bars just in time to play in a prison all-star baseball game! Nonsensical to say the least, Up the River is also a film that's hard to dislike. It was remade by 20th Century-Fox in 1938, with Preston S. Foster and Tony Martin respectively in the Tracy and Bogart roles.

Elizabeth Keating
as May and June

Helen Keating
as May and June

Critic Reviews for Up the River

The film was popular with Depression era-audiences, though the critics creamed it.

Audience Reviews for Up the River

John Ford paints a picture of America like Norman Rockwell painted, uhhh, pictures: a reflection, a fantasy, people wanted to believe was true (despite evidence to the contrary). So prisons are like summer camps, prisoners simply regular guys who lacked the right chance, yadda, yadda, yadda. Hokum, P.T.Barnum style hokum, sure, and delivered with a smile, but entertaining hokum, yeah? Yeah. Plus, Spencer Tracy as the cocksure, conman type, Mr.Fix-It, and Bogie (yeah, THAT Bogie) as The Kid. Not bad.

Up the River Quotes