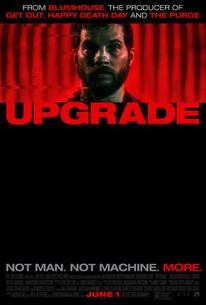 Critics Consensus: Like its augmented protagonist, Upgrade's old-fashioned innards get a high-tech boost -- one made even more powerful thanks to sharp humor and a solidly well-told story.

Critics Consensus: Like its augmented protagonist, Upgrade's old-fashioned innards get a high-tech boost -- one made even more powerful thanks to sharp humor and a solidly well-told story.

Critic Consensus: Like its augmented protagonist, Upgrade's old-fashioned innards get a high-tech boost -- one made even more powerful thanks to sharp humor and a solidly well-told story.

After his wife is killed during a brutal mugging that also leaves him paralyzed, Grey Trace (Logan Marshall Green, SPIDER-MAN: HOMECOMING, PROMETHEUS) is approached by a billionaire inventor with an experimental cure that will "upgrade" his body. The cure - an Artificial Intelligence implant called STEM - gives Grey physical abilities beyond anything experienced and the ability to relentlessly claim vengeance against those who murdered his wife and left him for dead.

Simon Maiden
as Stem
View All

It's funny, violent and full of ideas.

It takes just the right number of liberties with what you can actually believe in.

It's still a small, silly movie and there's nothing particularly novel or even of the moment about its technosceptic stance on machines, but as a genre exercise, it's a fun ride.

Whatever the case, Upgrade has enough extra features and add-ons to seem like much more than just another pre-programmed revenge thriller.

Apart from a few flimsy special effects...this is a satire that cleaves dangerously close to reality at times.

The kind of pulpy, low-pretense, non-franchise thriller that bigger studios have done their best to usher toward extinction.

With its emphasis on technology, slightly futuristic setting, and fondness for disturbing developments, Upgrade feels like an episode of Black Mirror that somehow managed to break free from its Netflix surroundings and emerge unscathed on the big screen.

Upgrade is the best of revenge thrillers mixed with a masterfully creative futuristic world.

Upgrade may not stick to your ribs like classic action movies but it's scarily effective in the moment.

There's a remarkable amount of cleverness in this dark, chaotic vision of the future, blending believable technology with fantastical notions of science-fiction.

Mike Massie
Gone With The Twins
View All Critic Reviews (193)

Upgrade is a unique, original sci-fi tale that bodes well with its technological concepts, dazzling cinematography and well-crafted story. This cyberpunk-esque envisioning and bloody-thirsty, quirky-humor-filled ride is an under-the-radar hit that is underrated for the year and deserves your attention. 4.2/5

Part cyberpunk action film, part body horror, all badass. Upgrade is one of the most entertaining movies of the year. The revenge premise is standard enough, and even some of the twists along the way are pretty on the nose, but their execution is flawless and haunting. It's led by an insanely charismatic lead, some amazingly stylish directing, and great use of violence. That last one may sound a bit odd, but let me put it this way: this movie actually made me gasp. It doesn't dwell on the violence, but it doesn't shy from it either when it needs to. It's perfect execution all around and an absolute thrill ride.

One step further along the sci-fi trail in the woods from Blade Runner, Matrix, (and Prometheus), this looks at the possible outcome beyond plastic surgery, but physical modification through nanotechnology. Characterizations are a little undercooked beyond the main character but the film is still a great deal of fun and a worthy consideration for a weekend night.

GET HER! - My Review of UPGRADE (3 1/2 Stars) During the Reagan 80s, it was no surprise that filmmakers reacted to his administration, whether consciously or not, by telling stories about loss of control. Think TERMINATOR, WAR GAMES, BLADE RUNNER, ROBOCOP, ROAD WARRIOR, the stunning 1984, or BLUE VELVET to get the idea that a dystopian world felt well within our grasp. Flash forward to today, where a dangerous xenophobic, racist who Tweets nonsense and thinks it's best to "wing it" when meeting with an unstable nuclear power, and it's no wonder the artistic response has grown really dark. I watch THE HANDMAID'S TALE and feel we're just 5 minutes away from Gilead. Not all artistic endeavors come out as thoughtful and polished as that one. Often the slapdash exploitation films do the trick just as well. Here's where UPGRADE, from the SAW and INSIDIOUS scribe Leigh Whannell enters the fray. On the surface, it's a cheesy, sci fi thriller version of THE SIX MILLION DOLLAR MAN, but its commitment to the surprise of violence due to lack of control, sets itself firmly within the nightmare known as Trump's America. Or maybe Whannell just wanted to make a cool action movie in the 1970s Ozploitation vein of his home country. Either way, Logan Marshall-Green (THE INVITATION, PROMETHEUS) stars as blue collar mechanic Grey Trace, who, in the not too distant future, lives in a world where computers and smart phones anticipate your every need. Sure, we're there now already, but this movie traffics in sleeker environs, so you know it's the future. One evening, he takes a classic hot rod to one of his clients, a young, blond sociopath of a billionaire named Eron (Harrison Gilberston) who introduces him to a new technology he's developing called STEM. Presenting it as a way to make the world better, we know because Eron has Crystal meth eyes and lives in a lair under the beach, that he's up to no good. Tragedy, of course, strikes Grey, rendering him a quadriplegic with a mission to seek revenge against those who caused him so much pain and grief. Eron re-enters the picture, offering Grey his STEM implant (not very subtle there), which not only cures him, but gives him super-human strength. What could go wrong?!! What follows is a series of exciting, comically absurd, wonderfully presented fight set pieces replete with great ultra-violent kills (you'll never look at a large kitchen knife the same way again), all delivered with Marshall-Green enraged yet stunned by his own powers. The STEM talks him through his feats, although nobody else can hear it, making for the greatest robotic pantomimes since Lily Tomlin took over Steve Martin's body in ALL OF ME. It's a cautionary tale about the fear of losing one's power, and being careful what you wish for when you gain it back. It's your typical Man Meets Siri/Man Fights With Siri/Man Tries To Live With Siri love story. Think Spike Jonez's HER with 100% more karate chops. Betty Gabriel, the scene-stealing housekeeper from GET OUT, gets a nice chance to smoothly navigate a co-starring role as a detective on the case. She's commanding and between this and the former film, demonstrates range and movie star charisma. The rest of the cast is fair-to-middling much in the same manner of performances you'd see in old Cannon or Empire Pictures films. It's grindhouse acting from the 80s without the leather jackets and hair gel. UPGRADE embraces its schlockiness, knowing full well that its less dystopian vision and more crazy fights and fantastic Marshall-Green reaction shots. For some time now, he's been describes as the Poor Man's Tom Hardy, but UPGRADE allows him to break free from those shackles and unleash hell in a ridiculously funny, thrilling way. It reminded me of John Carpenter's THEY LIVE mixed with the body horror of vintage David Cronenberg. Between this and REVENGE, 2018 is shaping up to be midnight movie heaven.