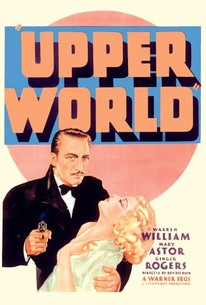 Written by the prolific Ben Hecht, Upper World is a clash-of-class melodrama set in New York City. Railroad tycoon Alexander Stream (Warren William) is neglected by his social-climbing wife Mary Astor. Quite unintentionally, through a chance encounter, he strikes up a reasonably chaste friendship with good-hearted showgirl Lilly Linder (Ginger Rogers). Lilly's ex-boyfriend Lou Colima (J. Carroll Naish) sees an opportunity to blackmail Stream; Lilly tries to block him from doing so, and is murdered for her troubles. Stream shoots Colima in self-defense and manages to cover up his involvement so that the crime scene looks like a murder-suicide, protecting his good name and marriage in the process. But a vitriolic cop (Sidney Toler), whom Stream had earlier gotten demoted over a traffic stop -- and who was on patrol in the vicinity of the crime -- involves himself in the case and gathers enough evidence to point the detectives and the press toward the wary tycoon. Though he must stand trial for Colima's death, Stream is supported in his ordeal by his suddenly attentive and affectionate wife.

Andy Devine
as Oscar the Chauffeur

Robert Greig
as Caldwell the Butler

John Qualen
as Chris the Janitor

William B. Davidson
as City Editor

Harry Seymour
as Passerby
View All

There are no critic reviews yet for Upper World. Keep checking Rotten Tomatoes for updates!

There are no featured audience reviews yet. Click the link below to see what others say about Upper World!