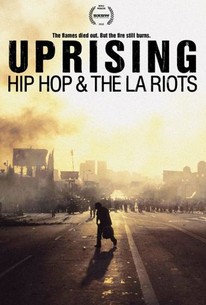 20 years after riots ripped through Los Angeles, UPRISING documents how hip hop forecasted - and some say ignited - the worst civil unrest of the 20th century. The film revisits the riots in gripping detail and draws from a diverse collection of voices - the rappers, rioters, victims, police officers, journalists and everyday citizens of South Central Los Angeles. The documentary traces the rise of dissent in Los Angeles in the 80's and 90's and explores why citizens chose to rise up violently against police abuse and perceived injustices.

Critic Reviews for Uprising: Hip Hop and the LA Riots

This brief documentary highlights a fascinating moment in history and explores if anything has changed as a result of that angry event.

There are no featured reviews for Uprising: Hip Hop and the LA Riots at this time.