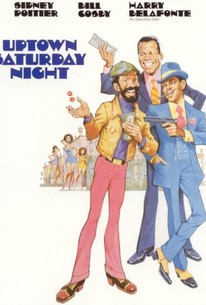 Uptown Saturday Night is a delightful comedy directed by and starring Sidney Poitier. Steve Jackson (Sidney Poitier) is a factory worker. One evening, when boredom gets the best of him, Steve and his pal Wardell (Bill Cosby) decide to go to an underground gambling club to have some fun. While they are there the place is held-up and Steve's wallet is stolen. When Steve and Wardell learn that the wallet contains a winning lottery ticket, the friends go on a desperate search to find it. Shape Eye Washington (Richard Prior), an incompetent private eye, is enlisted to aid them in their search through the criminal underworld where they come up against Geechie Dan Beauford (Harry Belafonte) the mobster who runs the town. Belafonte, in a hilarious parody of Marlon Brando in The Godfather, steals the show. The movie was a huge success and led to two sequels, Let's Do It Again and A Piece of the Action, both also directed by Poitier.

Flip Wilson
as The Reverend

Lincoln Kilpatrick
as Slim's Henchman No. 1

Don Marshall
as Slim's Henchman No. 2

We should continue to demand, expect, and fight for much more from our movies. But we should never let ourselves be content with yesterday's warmed up left-overs. And, unfortunately, that's just what Uptown Saturday Night is.

I have nothing but good feelings about the movie.

An uproarious urban comedy that's sure to cater to the crowd. Poitier and Cosby make for a riotous duo in this flipppant farce.

Great buddy chemistry between Cosby and Poitier make this a 70's classic.

Not as good as "Let's Do It Again", but has its moments.

Something about Bill Cosby picking a fight makes me laugh.