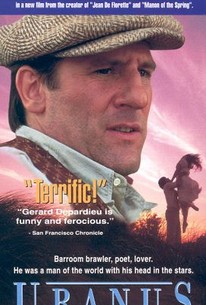 Uranus is set in a post-war French village that has been all but obliterated by the bombing. Jean-Pierre Marielle plays a middle-class family man who agrees to shelter many of those who've lost their homes. The polyglot of political beliefs held by these new tenants sows the seeds of discontent. The most vocal of the town's dissidents are the Communists, who terrify everyone with threats of turning in collaborators to the French Forces of the Interior. The only person in town afraid of no one is hulking innkeeper Gerard Depardieu, whose ultimate death uncovers much of the hypocrisy disguising itself as patriotism in the village. While never exactly sympathizing with the collaborators, Uranus is careful to point out that the "unofficial" executions of these unfortunates was no more morally acceptable than the Nazi invasion that encouraged collaboration in the first place.

Claude Berri's Uranus is a complex and many-layered portrait of this village, just at the moment when all of France was sorting out what it would do on the issue of collaboration.

Probes the ways in which the fabric of community can be destroyed by secrecy, injustice, hypocrisy and indifferece.

Well worth your while.