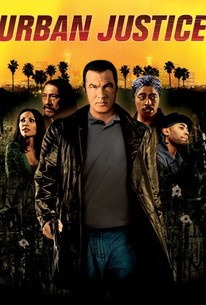 When an honest cop is senselessly gunned down on the means streets of a poverty-stricken city, his fearless father moves into the neighborhood on a deadly mission of vengeance in this gritty urban action thriller starring Steven Seagal and Eddie Griffin. Max Ballester was a good cop who made the unfortunate mistake of being in the wrong place at the wrong time. Now Max is dead, the victim of a senseless and seemingly random act of violence. When the murder goes unsolved and the police fail to single out a suspect, Max's father, former government special ops agent Simon Ballester (Seagal), decides to take the law into his own hands. After moving in to the very neighborhood where his son was recently gunned down, Simon embarks on a relentless mission to find his son's killer - constantly probing everyone who crosses his path and never hesitating to crack a skull or two when things get tough. Of course the local gangs don't take kindly to such bold inquiries, especially when they are being conducted by an ex-government agent. Fortunately Simon is more than capable of fending for himself in such dangerous situations, and as the local thugs come out to play he unleashes a fury the likes of which have never been seen even on these treacherous streets.

Janet Cho
as Chivo's Girlfriend No. 1

RT on DVD: The Return of Shrek, Miami Vice, and Seagal!

That Urban Justice eventually devolves into yet another tedious Steven Seagal actioner is particularly disappointing, as the movie boasts an opening half hour that essentially possesses the feel of an old-school Seagal effort.

A cut above the usual kick butt orthopedic surgeon's wet dream, with Steven Seagal looking dapper, mean and bulked up in leather.

There are no featured audience reviews yet. Click the link below to see what others say about Urban Justice (Renegade Justice)!