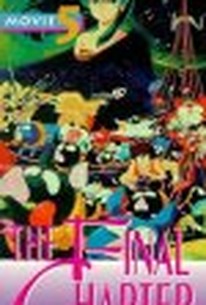 Originally titled Uresei Yatsura: Kanketsuhen, this Japanese animated feature was designed as the last of five films based on a comic magazine created by Rumiko Takahashi. As before, the central characters are oversexed (and chronically faithless) high-school student Ataru Morobishi, and his extraterrestrial "house guest," the bikini-clad Lum, Princess of the Oni. The character design this time around is more in line with the Uresei Yatsura TV movies that preceded the theatrical films, rather than the cult-favorite weekly cartoon series (aka Those Obnoxious Aliens). On the other hand, Final Chapter's continuity adheres more closely to the original comic book than any of the TV incarnations. Not yet released on a widespread basis to the U.S., The Final Chapter has been given high marks by the handful of American Uresei Yatsura fans who've been lucky enough to see it. Most have lauded the logical conclusion to the saga and the intensified relationship between Ataru and Lum. As it turned out, The Final Chapter was anything but; a sixth film, Urusei Yatsura Movie 6: Always My Darling followed in 1991. ~ Hal Erickson, Rovi