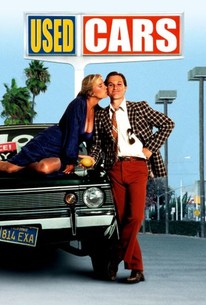 Used Cars is one of Robert Zemeckis' pre-Roger Rabbit and pre-Forrest Gump efforts starring Kurt Russell is a devious car salesman who goes to work for affable but monumentally unsuccessful used car dealer Jack Warden. Warden's principal rival is his more prosperous twin brother, also played by Warden, who schemes to take over the "good" brother's lot. After a series of raunchy vignettes, the film boils down to an every-man-for-himself price war between the two Wardens, which rages on even after we're one Warden short. The supporting cast of Used Cars is populated by such reliables as David L. Lander, Michael McKean, Al Lewis, Dub Taylor, Dick Miller and Betty Thomas.

Frank McRae
as Jim, the Mechanic

Dick Miller
as Man In Bed

Rita Taggart
as Woman In Bed

Sandy Gibbons
as Cop at Roadblock

Betty Thomas
as Bunny
View All

This classic screwball fantasy is like a more restless and visually high-spirited version of the W. C. Fields pictures.

Director/co-writer Robert Zemeckis has undeniable energy and flair, but it's being misspent on pretexts and situations that seem inexcusably gratuitous and snide.

Most of the time, I didn't know whether to laugh or shudder, and I ended up doing a lot of both.

What might have looked like a great idea on paper has been tackled by filmmakers who haven't expanded it much beyond the one joke inherent in the premise.

Used Cars runs on a contemporary screwball motor with a slapstick chassis.

Used Cars was written, directed, and produced by the team of Bob Zemeckis and Bob Gale, two young filmmakers who seem to be higher on kinetic energy than on structure and comedic instinct.

It has some raunchy fun pillaging used car salesmen as untrustworthy.

Featuring a great turn from Kurt Russell, Used Cars is both a brilliantly funny comedy and a good reminder of just how interesting a writer-director Robert Zemeckis used to be.

It's also one of the funniest ruminations on American values, as the car showroom becomes a warped microcosm of society.

Used Cars is full of used characters, used ideas, and used jokes, many of which are in astonishingly bad taste.

Filled with riotous plot twists and effective black humor, this is a truly inventive and memorable comedy.

Sixties nostalgia from I Wanna Hold Your Hand shifts to bracing vulgarity circa late-'70s, just as Kurt Russell graduates from Disney to conman greasiness.

A comedy about lying is difficult to approve of and yet Zemeckis' team and presentation will at least have you consider it's viability. The fantasy, about two used car dealerships vying for dominance in the desert Southwest, is a decent platform for the general thesis, a natural one. Where else does one expect lying as a given (and don't say politics or prostitution, cause that's too easy)? Sure, like lying, they go a little overboard, but it's all in good fun.

A hilarious adventure comedy with a good story. I loved it.

80's classic ,one of kurt russel and robert zemeckis forgotten gems.Ok its dated but they dont make them like this anymore,not even the recent "the goods,live hard,sell hard can beat this.....find it and watch it now..

My least favourite of all of Robert Zemeckis' movies, but a fairly amusing (not to say really wacky and kinky) comedy in any case. The plotline, about two rivaling used cars salesmen who will go to any length to put the other out of business, is pretty much as simple as it gets. Perhaps a little too simple, as it would probably have worked better as an SNL sketch or something, as opposed to a full-length movie. It sure has its moments though and was funny enough to be worth the watch.