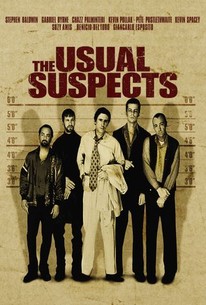 Critics Consensus: Expertly shot and edited, The Usual Suspects gives the audience a simple plot and then piles on layers of deceit, twists, and violence before pulling out the rug from underneath.

Critics Consensus: Expertly shot and edited, The Usual Suspects gives the audience a simple plot and then piles on layers of deceit, twists, and violence before pulling out the rug from underneath.

Critic Consensus: Expertly shot and edited, The Usual Suspects gives the audience a simple plot and then piles on layers of deceit, twists, and violence before pulling out the rug from underneath.

Near the end of The Usual Suspects, Kevin Spacey, in his Oscar-winning performance as crippled con man Roger "Verbal" Kint, says, "The greatest trick the Devil ever pulled was convincing the world he didn't exist." This may be the key line in this story; the farther along the movie goes, the more one realizes that not everything is quite what it seems, and what began as a conventional whodunit turns into something quite different. A massive explosion rips through a ship in a San Pedro, CA, harbor, leaving 27 men dead, the lone survivor horribly burned, and 91 million dollars' worth of cocaine, believed to be on board, mysteriously missing. Police detective Dave Kujan (Chazz Palminteri) soon brings in the only witness and key suspect, "Verbal" Kint. Kint's nickname stems from his inability to keep his mouth shut, and he recounts the events that led to the disaster. Five days earlier, a truckload of gun parts was hijacked in Queens, NY, and five men were brought in as suspects: Kint, hot-headed hipster thief McManus (Stephen Baldwin), ill-tempered thug Hockney (Kevin Pollak), flashy wise guy Fenster (Benicio Del Toro), and Keaton (Gabriel Byrne), a cop gone bad now trying to go straight in the restaurant business. While in stir, someone suggests that they should pull a job together, and Kint hatches a plan for a simple and lucrative jewel heist. Despite Keaton's misgivings, the five men pull off the robbery without a hitch and fly to Los Angeles to fence the loot. Their customer asks if they'd be interested in pulling a quick job while out West; the men agree, but the robbery goes horribly wrong and they soon find themselves visited by Kobayashi (Pete Postlethwaite), who represents a criminal mastermind named Keyser Soze. Soze's violent reputation is so infamous that he's said to have responded to a threat to murder his family by killing them himself, just to prove that he feared no one. When Kobayashi passes along a heist proposed by Soze that sounds like suicide, the men feel that they have little choice but to agree. ~ Mark Deming, Rovi

Gene Lythgow
as Cop on Pier

Bob Elmore
as Bodyguard No. 1

David Powledge
as Bodyguard No. 2

Bob Pennetta
as Bodyguard No. 3

Bill Bates
as Bodyguard No. 4

News & Interviews for The Usual Suspects

View All The Usual Suspects News

Critic Reviews for The Usual Suspects

The Usual Suspects flirts with greatness but attempts too much. It's a fascinating failure.

An imaginative, entertaining crime mystery with plenty of nerve and vigor.

If the pleasures of The Usual Suspects are the more superficial ones of ingenuity and style, those are abundantly available. The twists and turns of the plot are an awful lot of fun, while the ending is genuinely satisfying and surprising.

In a season of fat blockbusters, a picture as brainy, bitter, and compact as this one comes as a shock and a treat.

It's a nerve-shredding suspense movie about corruption, a bravura actor's show full of deliciously twisted cops and robbers, and a complex riddle packed with unexpected turns.

For many true movie fiends, noir is the key American movie type, and the most fun when it's done right. The Usual Suspects is done right.

Singer uses a clever combination of flashback and straight narrative to keep his tale of crime and betrayal moving through a tangle of blind alleys and false leads.

Features perhaps the most famous of all movie lineups and the most unforgettable series of unpredictable twists.

One of the best heist films ever made. Includes one of the all-time best twists/reveals in film history. [Full review in Spanish]

In all of my heist movies research, and all of the things that I've watched recently, I think The Usual Suspects might be the best heist movie of all time.

EVERYTHING that takes place during the two hours minus a quarter of footage comes to affirm that in Singer we had found a rough diamond that already polished some facets. [Full Review in Spanish]

A film that was compelling enough with its intricate narrative and colorful cast of degenerates, became an entirely different beast with its final sequence, putting the twist in plot-twist more memorably than M. Night Shyamalan could ever dream of.

Audience Reviews for The Usual Suspects

A film that needs to be viewed multiple times in order to fully appreciate, The Usual Suspects is unassumingly intelligent.

A clever scripted executed with a brilliant cast (including the cunning Kevin Spacey). The Usual Suspects keeps you guessing and on the thrilling edge with its layer-filled plot, direction and its deceitful twist that's still praised as one of the more surprising ones to this day. 4/5

A group of hardened career criminals find themselves in the same police line up and decide to use the opportunity to pull a lucrative heist, little knowing that their strings are being pulled by a notoriously ruthless underworld figure. Bryan Singer's debut was a beautifully crafted crime thriller taking a lot of cues from the classics of Film Noir such as the Killing and The Asphalt Jungle using an excellent ensemble cast and ingenious plotting to keep you guessing as the plot twists and turns like a writhing serpent trying to wriggle free your grasp. It's one of those films you wish you could see for the first time again and again but although it clearly suffers if you know the cunning twist in the tale, The Usual Suspects still has much to offer during repeat viewings. It may lack the weightier characterisation of the likes of Heat or L.A. Confidential, but it's still easily one of the best crime stories of recent years and I implore anyone who hasn't had the ending spoiled for them yet to watch it ASAP while you still can!

Skeletal budget. Classy realization. To conceive that as little as six million dollars went into the making of this film - that's 2% of the production expense of The Dark Knight Rises mind you - is, in one word, flabbergasting. And if that doesn't arch an eyebrow, perhaps the actuality that it was directed by a 30-year-old Bryan Singer (who at the time had but one feature film and one little anonymous short in his luggage) will. Needless to say, it takes the savviest sort of visionary to pull off a tour de force of the kind. A magician even, grinding a coarse piece of coal until it becomes a bright, shiny diamond. Like many promising young film-makers though, it seems he has now tragically gone the George Lucas route. By that I'm referring to $195 000 000 fairy tale flop entitled Jack the Giant Slayer, which - if I'm gonna be mathematical about it - equals to thirty The Usual Suspects. And for what, I ask? A nimiety of CGI that immediately dissolved into the white noise of blandville? Oh yeah, that's money well spent. And such a sad touch of irony. But enough number-crunching for a while. Exciting from the get-go, this neo-noir mystery thriller has rightfully earned its diploma as one of the all-time greats. Boasting a superlative cast, it weaves the highly intricate tale of five peculiar criminals - all of different aptitudes, personalities and walks of life - and how they're tied to a central incident in film, involving a massacre aboard a cargo ship docked at the Port of Los Angeles. Implicated in this is also Keyser Söze, an enigmatic crime lord and character of such fame and legend that he would transcend the film per se and become a pop culture phenomenon of his own. Not bad for a guy who - spoiler alert - doesn't exist. Leaving it naked at that description, however, would be to simplify the narrative. Plot threads are numerous and each character, big or small, has his little story to tell. In the main though, it can be divided into two separate blocks: one, which takes place in the present, fixed on the interrogation of Roger "Verbal" Kint, a crippled con man played by an exceptionally subtle Kevin Spacey. A role which would also land him his very first Oscar. Divulged to us by Verbal through narration and sizable flashbacks, the other story block accounts for the series of events that would ultimately lead up to the incident on the boat. Deals, heists, humorous interplay between the five outlaws - some levity at first, but then progressively darker and complex. A caper requiring great focus, and like so rewards the attentive viewer. I've always loved films that loom large as smarter than yourself: how it makes you ponder, concentrate, put all your brain cells to work. Cerebral and labyrinthian, but not too far over your head. The screenplay by Christopher McQuarrie is exactly that, and the Academy did the respectable thing, handing him an Oscar for his astonishing wordsmanship. Praised be also the thespians for carrying out their lines with such verve. Gabriel Byrne, Kevin Pollack, Pete Postlethwaite and Benicio Del Toro. And yes, even Stephen Baldwin, star of such beloved classics as Slap Shot 2: Breaking the Ice and The Flintstones in Viva Rock Vegas, is framed within the mugshot of a first-rate screen performer in this film. The power of an outstanding script I suppose, and a director who knows his craft, bringing out the best in all his players. Close to perfection on all accounts - the editing, the cinematography, the rousing music score by John Ottman - it all runs like clockwork. My one and only complaint is that the pacing, between missions, is a little slow and rough around the edges at times. But whenever the action kicks in - whether it be abstract, verbal or in the language of bullets - you can be sure that it does so with world-class suspense. Edgy and thoroughly awesome; a film for true film buffs, who rate intellect above the needlessly bombastic and akin to Se7en, The Sixth Sense and other masterworks of the 90's, are never-not-welcoming to a great final twist. "Who is Keyser Söze? He is supposed to be Turkish. Some say his father was German. Nobody believed he was real. Nobody ever saw him or knew anybody that ever worked directly for him, but to hear Kobayashi tell it, anybody could have worked for Söze. You never knew. That was his power. The greatest trick the Devil ever pulled was convincing the world he didn't exist. And like that, poof. He's gone." http://www.facebook.com/pages/Mikes-Movie-Reviews/281824101875153?ref=hl