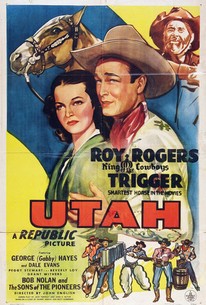 Most cowboy leading men have only a single leading lady: in Utah, Roy Rogers is literally surrounded by delectable females, including his perennial movie (and real-life) sweetheart Dale Evans. The plot concerntrates on actress Dorothy Bryant (Evans), who inherits a ranch in (where else?) Utah. Hoping to raise money for her upcoming musical show, Dorothy intends to sell the ranch, but foreman Roy Rogers doesn't want her to. Joining Rogers in his efforts to block the sale is cantankerous neighboring rancher Gabby (George "Gabby" Hayes). After innumerable complications, Dorothy realizes that Rogers is right-and manages to have her cake and eat it too by staging her musical revue at the ranch itself. Appearing as Dorothy's entourage are such appealing Republic starlets as Peggy Stewart, Jill Browning and Beverly Loyd.

As far as singing cowboy B Westerns go, this lively one strikes just the right chord.

Another movie from the Mill Creek Roy Rogers 20 movie collection. Roy is in charge of a ranch that is owned by a girl back in Chicago, she travels west to sell the farm but is swindled by both Roy and Ben Bowman, but Roy is to make things right but he must travel back to Chicago to do so. The good guys wear white and of course the bad guys are all in black, 3 stars