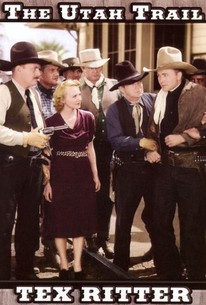 The Utah Trail was another of Tex Ritter's westerns for Edward Finney's Boots & Saddles Productions. Singing cowboy Ritter stars as federal agent Tex Lawrence, disguised as an outlaw so that he can trap a gang of rustlers in the act. Headed by the scurrilous and well-named Slaughter (Karl Hackett), the villains use their own private railroad train to stage raids on local cattle ranches. Our hero manages to foil the heavies with only minimal aid from comic sidekicks Snub Pollard and Horace Murphy. The leading lady in Utah Trail is Adele Pearce, later known as Pamela Blake.

Horace B. Carpenter
as Clayton

James Sheridan
as Henchman
View All

There are no critic reviews yet for Utah Trail. Keep checking Rotten Tomatoes for updates!

There are no featured reviews for Utah Trail at this time.