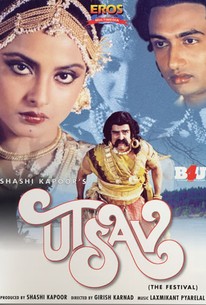 Based on the 6th century A.D. Sanskrit play "The Golden Toy Chariot" by the famous Indian playwright Bhasa, "Utsav" faithfully follows Bhasa's story-line. Vasantasena, a courtesan who dances at the King Palaka's court hides in Charudatta's house while running away from the amorous attentions of the king's brother-in-law. She falls in love with Charudatta, though he is married and penniless. They have an affair. Meanwhile, the rightful heir to the throne - King Palaka's brother - escapes from prison. While he is being pursued by the king's troops, Charudatta helps him. The king's brother-in-law strangles Vasantasena when she refuses to submit to him and leaves her for dead. When Charudatta tries to have her jewels pawned, he is arrested for her murder. What happens to him and the other characters constitutes the final part of the film.

Critic Reviews for Utsav (The Festival)

There are no critic reviews yet for Utsav (The Festival). Keep checking Rotten Tomatoes for updates!

There are no featured reviews for Utsav (The Festival) at this time.