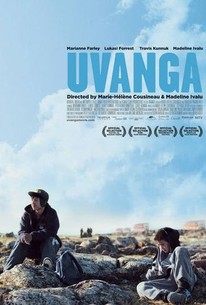 The Arnit Video collective follow up their award-winning 2008 debut Before Tomorrow with this introspective drama that borrows its title from the Inuktitut word for "myself" and centering on a Montreal teen and his mother who venture to the Canadian Arctic on a quest to explore his Inuit heritage. Fourteen-year-old Tomas (Lukasi Forrest) never knew his late father. The product of a brief affair between his mother Anna (Marianne Farley) and an Inuit man, he was born and raised in Montreal. He's always been curious about his roots though, and upon arriving in the Canadian Arctic for a two week stay Tomas gradually discovers that his family history is deeply complicated. With the midnight sun making time seem to stand still, the disoriented teen and his wary mother soon learn that forging a connection with their long lost family could be an emotionally excruciating endeavor.

Even the natural beauty serves as reminder of what isn't there, and I'm not just talking about nightfall.

A story of homecoming and reconciliation told in the patient, rhythmic cadences of Inuit voices.

The film's strongest moments lie in the relationship between the two boys.

There are no featured reviews for Uvanga at this time.