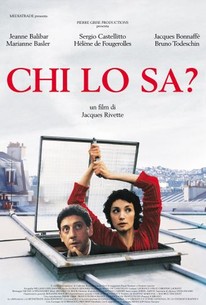 Critics Consensus: Constructed with grace and wit, Va Savoir is a light-hearted yet cerebral romantic comedy of intertwining relations.

Critics Consensus: Constructed with grace and wit, Va Savoir is a light-hearted yet cerebral romantic comedy of intertwining relations.

Critic Consensus: Constructed with grace and wit, Va Savoir is a light-hearted yet cerebral romantic comedy of intertwining relations.

A romantic comedy from acclaimed French director Jacques Rivette (La Belle Noiseuse), this film centers on three men and three women whose lives converge during the run of a play in Paris. The star of the play, Camille (Jeanne Balibar), is returning to Paris after leaving her stuffy boyfriend Pierre (Jacques Bonaffe) and residing in Italy. Her Italian theater company has brought her to France, where the show is run by her lover, director, and co-star Ugo (Sergio Castellitto). Ugo is concerned with the show's poor attendance, but also busy searching for a long-lost play by an Italian playwright. While on his quest, he discovers the beautiful young Do (Helene De Fougerolles), a student who offers to help him. Do's mother has a library that may contain the lost play, and Ugo runs into her possessive half-sibling Arthur (Bruno Todeschini), a shady man pursuing an affair with Pierre's wife Sonia (Mariane Basler), who also has a questionable past. After a brooding dinner at Pierre and Sonia's home, tensions mount in everybody's relationships and their romantic journeys are similarly tested. A lighter work from the usually dramatic filmmaker Rivette, the film was made by the director at the amazing age of 73.

Helene de Fougerolles
as Do

Enrico Marassi
as Young Man--As You Desire Me

Cesare Panzera Capitani
as Young Man--As You Desire Me

Roberto Manieri
as Young Man--As You Desire Me

Constantino Raimondi
as Young Man--As You Desire Me
View All

Although the acting and recombinant twists of the plot dance with spontaneity, Rivette's mise-en-scène is precision exemplified.

It lacks the scariness, the mystery, and even much of the curiosity of Rivette's better work.

It's slight, contrived and conceited. But, oh, for more films as flawed as this one.

A generally wonderful experience, though it should come with a warning posted outside the theatre: Not for the impatient.

Slow but savvy look at what we do for love.

Rivette's examination of the nature of relationships is witty and light-hearted.

It's an engaging diversion from a master director who, at the ripe age of 78, appears to be once again at the top of his game.

Jacques Rivette's playful romance takes time to find its feet, yet its leisurely charm and generous compassion towards its characters proves a winning combination.

The result is like a formation dance performed at the speed of a chess game.

In its artistic quality, subtle complexity, and thematic concerns Rivette's film recalls Renoir's Rules of the Game and particularly Ingmar Bergman's Smiles of a Summer Night, which also deals with a theatrical troupe and the notion of life versus art

If true love is a state in which each sees the other as he or she would most want to be seen (and maybe it isn't), then Va savoir (Who Knows) is the definition of true love.

Leave it to the French to release a film that refuses to pander to the lowest common denominator.

Not a particularly memorable effort by Rivette.The pacing of the film seems to be off as it results in a ponderous delivery of story and character.