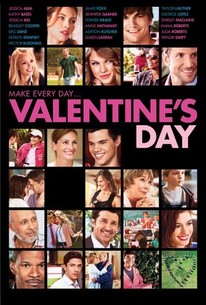 Critics Consensus: Eager to please and stuffed with stars, Valentine's Day squanders its promise with a frantic, episodic plot and an abundance of rom-com cliches.

Critics Consensus: Eager to please and stuffed with stars, Valentine's Day squanders its promise with a frantic, episodic plot and an abundance of rom-com cliches.

Critic Consensus: Eager to please and stuffed with stars, Valentine's Day squanders its promise with a frantic, episodic plot and an abundance of rom-com cliches.

Gary Marshall's ensemble romantic comedy Valentine's Day follows nearly two dozen people as they find and lose love in all its many forms over the course of the title holiday. The numerous characters include a very busy florist (Ashton Kutcher) and his schoolteacher best friend (Jennifer Garner). She's having an affair with a married doctor (Patrick Dempsey). Meanwhile, a businessman (Bradley Cooper) and a military captain (Julia Roberts) on leave share a long conversation during an international flight. There's also an elderly couple (Hector Elizondo and Shirley MacLaine) who are caring for their elementary school-age grandson, who is pining for a classmate and missing his mother. The huge cast also includes Jamie Foxx as a local TV personality, Topher Grace, Queen Latifah, and Anne Hathaway. ~ Perry Seibert, Rovi

Sarah Lilly
as Lady With Dog

Cyrus Alexander
as Cisco the Cheater

... it forgets to pause and consider what romance is really about and it's not about trying to be the new Love Actually

Yes, it's cliched and not well acted, Valentine's Day still musters up some comedic moments (mostly from Ashton Kutcher) and keeps your attention.

A gigantic mess of cliché romantic dramas that only works because it's brought to life by familiar faces and talented actors.

It's a very glib, shallow movie, but it keeps you moving around enough that you could actually have a good time.

It's got a cold, shiny cash register right where its heart should be.

If Crash had been a romantic comedy, odds are it would have looked a lot like Valentine's Day.

Garry Marshall...knows his audience... He delivers what we expect and here he does it all tied up in a heart-shaped box with a big red bow - make that lots of big red bows. Kitschy? You bet. But it's fun!

There's absolutely nothing here you haven't seen before, and some of it is downright insulting.

Works where so many romantic comedies in general fail because it doesn't offer some idealized look at love, but shows the power of it - warts and all - from a variety of perspectives.

It tries so hard to capture the magic of films like Love Actually but just stumbles.

A collection of intertwined romances with the fleeting "aww" factor of a candy sweetheart.

LOLZ! Got this movie download free for joining some movie download service. Even though it was free, I still feel I was ripped off. It would be a perfect Valentine's Day movie if vomiting in your mouth a little bit counted as a "kiss". Cummon, Gary Marshall. Enough with the dreck!

"Valentine's Day is a movie I actually enjoyed. I thought it was funny. Well mainly Anne Hathaway. She steals the show. Her accents and the things she says. It's really funny. The story lines are predictable with the exception of a couple that really surprised me. The older actors stand out more and do a better job in this film then the younger one's. But I do like how they tell the stories of love from grade school to old school. Most of the stories were good, but a few of them were just boring and not needed. But with so much going on the director does a good job at threading the stories together. They are all linked together in one way or another. Ended up being a pretty cute funny movie. It is worth a watch."

Valentines Day is like the new "We Are The World 25" music video: Stupid, pointless and full of untalented celebrities.

I like movies where storylines intertwine with one another, and Valentine's Day certainly has that - perhaps twenty A and B list actors figuring out their love lives on Valentine's Day. It is somewhat like "Love Actually", but never quite claws its way up to the point where you think the characters care about each other.