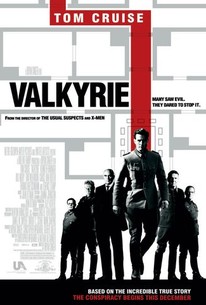 Critics Consensus: Given the subject matter, Valkyrie could have been an outstanding historical thriller, but settles for being a mildly entertaining, but disposable yarn.

Critics Consensus: Given the subject matter, Valkyrie could have been an outstanding historical thriller, but settles for being a mildly entertaining, but disposable yarn.

Critic Consensus: Given the subject matter, Valkyrie could have been an outstanding historical thriller, but settles for being a mildly entertaining, but disposable yarn.

A proud military man, Colonel Claus von Stauffenberg is a loyal officer who serves his country all the while hoping that someone will find a way to stop Hitler before Europe and Germany are destroyed. Realizing that time is running out, he decides that he must take action himself and joins the German resistance. Armed with a cunning strategy to use Hitler's own emergency plan--known as Operation Valkyrie--these men plot to assassinate the dictator and over-throw his Nazi government from the inside. With everything in place, with the future of the world, the fate of millions and the lives of his wife and children hanging in the balance, Stauffenberg is thrust from being one of many who oppose Hitler to the one who must kill Hitler himself.

Valkyrie, as field-commanded by director Bryan Singer, succeeds on its own terms as a handsome hybrid of conspiracy thriller and history lesson, of Mission: Impossible and The Day of the Jackal.

When he is at the top of his game, as he is here, Cruise's charisma is blinding.

A film more concerned with 'how' than 'why' or 'who', Valkyrie would have benefited from more scrutiny and complexity. Still, once the bomb goes off, the thrills come in spades.

As old-fashioned historical escapism goes, this is solid, compelling stuff.

Singer makes a noble and romantic fist of this terrific story but it feels spookily like a well-oiled Hollywood entertainment rather than a sensational chapter of history.

Though it may not not the best WWII movie to premiere this year, it still supplies the thrills it promises.

Valkyrie isn't a disaster, but I'd rather have seen a different telling of the story.

Cruise is the film's biggest flaw.

If you can leave you incredulity at the door, however, Valkyrie isn't all bad. The large ensemble cast are excellent, even if they are speaking in a variety of accents.

Based on a true story. Unlike Inglourious Basterds.

Valkyrie is another entry into Cruise's canon of quality films and performances.

Anyone who has seen The Desert Fox will be familiar with this story, but instead of concentrating on Rommel, it examines the role of Claus Von Stauffenberg in the plot to assassinate Hitler after many of his officers began to question not only his tactics but his sanity. The theme of the two films is actually very similar; to show that not all of the German military or its people were Nazis, and there were some who were willing to sacrifice their lives to try and stop him. For me the most interesting part of the film takes place after the bombing when a plan is implemented to take over Berlin and I had no idea how far it went into effect and how close it came to succeeding; I can't help but wonder how different the world would be now if Olbricht had shown a bit more backbone or the meeting hadn't been moved to an outside location. From a technical point of view, it's unsurprisingly very solid, with classy direction from Bryan Singer and quality performances all round, although as usual it is very difficult to divorce tiny Tom from his screen persona. In all it's a very interesting history lesson that inevitably suffers from the fact that we all know how the story is going to play out and suffers in comparison to the gut wrenching intensity of Downfall. A good, solid war film nonetheless.

Historical drama. A number of inside attempts were made by Germans to assassinate Hitler. This movie tells the story of one of those plots. Tom Cruise leads a group of men to assassinate Hitler. Even though you know that Hitler committed suicide in real life, the movie makes you wish the outcome was different. Good story and cast. Only problem - everyone uses their own accents.

They conquered all Europe, the Nazis, so how could they fail assassinating the one madman behind it all, I've often wondered. Singer manages to put a human face on the proceedings, a true explanation, though more actual German inclusion would've been welcome in this retort to the countless "they're all evil" films out there. Tense and gripping, the work only suffers in that the subject is perhaps larger than a mere film can contain. Nonetheless a very good work.

When this film came up in a thread awhile back I was shocked to hear Cruise playing a part, well I now eat those words with a side order of beans. Cruise finally grows up and gives the best performance I have seen in his career possibly, and the fact its in a proper decent film which means something makes it even more powerful. An excellent film from start to finish is all I can say, very moving and extremely strong in performances. The whole film was very tense all the way, I could feel myself really sweating despite the fact I knew the outcome. You wanted them to succeed you really did, you think it will be alright and they could pull off a major political overthrow, the fact they don't does crush you at the end...it is brilliantly done. Its not a heavy film laden down with heavy politics like some films can be, its very straight to the point and doesn't ease up anywhere. It shows how many people inside the Third Reich were against Hitler and his plans from high up officials all the way down the ranks. I never knew there were so many attempts at Hitler's life This is also a good film for the German people, I'm sure they have to endure much from films in the past where all Germans are portrayed as evil, this will balance the past somewhat I hope. It was also amazing to read at the end credits that Stauffenberg's wife only died in 2006! Every cast member is brilliant...the cast itself is A class, even the minor roles are played well. The look is perfect and seems historically accurate, the sets are all really impressive and wardrobe is spot on. There isn't much action in this film so don't be expecting the usual war film stereotype, its mainly talk, but the words are real, hard, powerful, based on fact and don't give you a moments pause as the tension and suspense builds to its heart breaking finish. Like 'Schindler's List' this is a serious film, not quite in the same league or as harsh of course but cannot be ignored. My only down point is maybe it would have been even better if all cast spoke in German and the film had English subs, that would have really been authentic but hard to do I guess. Full marks :)