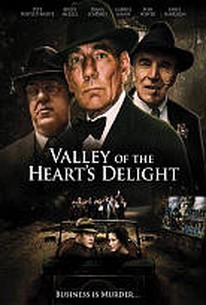 A young reporter is forced to take an active role in a story he's covering in this drama inspired by a true story. Jack Daumier (Gabriel Mann) is a journalist who has just been hired to write for The Valley Standard, a newspaper in San Jose, California published by Albion Munson (Pete Postlethwaite). While much of the country is mired in the great depression, San Jose's agricultural industry is prospering, and Jack mostly finds himself covering fluffy, inconsequential stories; he thinks he's following another one when he's asked to attend a party thrown by Horace and Natalie Walsh (Bruce McGill and Diana Scarwid) in honor of their son Blake Walsh (Joe Mandragona), who has been named second-in-command a Horace's successful department store. Jack thinks meeting Blake's beautiful sister Helen (Emily Harrison) is the high point of the evening until Blake disappears after stepping out for a moment. Horace is later contacted by kidnappers, who are holding Blake for ransom. As local and federal authorities squabble over how to handle the case and rival reporters from around the state invade San Jose to cover the kidnapping, two men are arrested and charged with the crime. A handful of powerful local businessmen are determined to see that "justice is served" and are ready to take the law into their own hands, but Jack speaks to a witness who makes a compelling case for the innocence of the accused men, and Jack decides he has to intervene to insure their safety. Valley Of The Heart's Delight was based in part on the 1933 abduction of Brooke L. Hart, though the story has been fictionalized for this adaptation.

Critic Reviews for Valley of the Heart's Delight

Pedestrian handling, a clumsy script and some poor acting from name and local thesps alike squander the story's potential.

There are no featured reviews for Valley of the Heart's Delight at this time.

Valley of the Heart's Delight Quotes