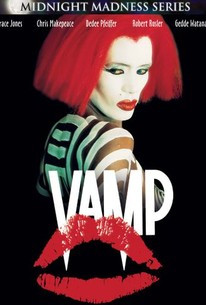 When a couple of fraternity pledges (Christ Makepeace and Robert Rusler) are sent out to find a stripper for the big campus party, they unwittingly contract the services of a bloodthirsty vampire.

Pops
as Dead Man in Car

TORONTO: Herzog’s "Rescue Dawn" Kicks Off Market On the Road to Oscar
Mos Def to Walk "16 Blocks" with Bruce Willis

Grace Jones is one of the great undiscovered countries of contemporary entertainment... Vamp is like all of her other movies, however. It doesn't know what to do with her.

...there's a certain visual pizazz to distract from the rather seedy narrative that taps into the inherent ghastliness of most nightclubs...

Vamp is Fright Night-lite but has a certain charm to it that keeps it from feeling like a retread. Also, Grace Jones own every scene she is in.

Vamp has some sense of style. It doesn't have much else.

I'm all for Grace Jones pawing at herself in a metal bikini and kabuki make-up, but "Vamp" lacks stimulating screen energy, looking to get by with the bare minimum in terms of horror, comedy, and pole-twirling sin.

The original "From Dusk Til Dawn"...

If nothing else, films like 'Eaten Alive' and 'Vamp' with their overriding influences to Tarantino represent important springboards. Regardless of the 'From Dusk Til Dawn' connection, 'Vamp' begins as a sublime hybrid of frat boy chemistry (the hanging hazing opening is a good misdirection) and vampire seduction, but it soon meanders aimlessly. One can accurately indicate when the film derails, it's after Robert Rusler departs midway through the film and the pink-neon lighting of a Joel Schumacher 'Batman' film becomes more incandescent. The androgynous Grace Jones is a rapturous creature in her Kabuki theater makeup and slender body, but she is hardly present until the deus ex machina finale. Additionally the puerile one-liners of a freshly vampiric Rusler is pure shtick ("I can work on this. Ever heard of night class?").

Fun cult horror from the 80s about a couple of frat boys who travel to a seedy stripclub with the aim of enticing one of their performers back to their college campus to impress the guys. Unknowingly to them, the club and surrounding area is full of vampires. It's limited with what it has to offer but it's energenic, fast-paced and quite amusing. The Vamp make-up effects and nicely done with Grace Jones looking terrifying with and without her vampiric appearance. Must-see for fans of 80s vampire films like Fright Night and The Lost Boys.

One of those fraternity comedies, but with vampires! A lot of fun, I liked this dark comedy.