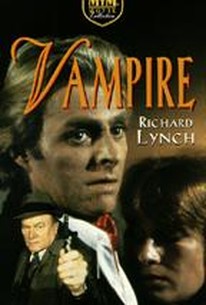 This remarkably chilling made-for-TV horror film plays as equal parts old-fashioned supernatural tale and 1970s-style detective thriller. After the groundbreaking of a San Francisco cathedral disturbs the resting place of an ancient European bloodsucker (professional creeper Richard Lynch), an architect (Jason Miller) joins forces with a retired gumshoe (E.G. Marshall) to hunt down and destroy the undead menace before he claims Miller's girlfriend as his nocturnal mate. Gothic trappings, slick production values, and some creepy night photography lend an effective edge to this modest production, although the frequent lapses into "trendy" disco-era setpieces become a bit annoying. Lynch, whose gravelly voice and sinister looks have typecast him for life, thankfully avoids lapsing into camp, exuding instead a powerful air of controlled sexual menace.

There are no critic reviews yet for Vampire. Keep checking Rotten Tomatoes for updates!

There are no featured reviews for Vampire at this time.