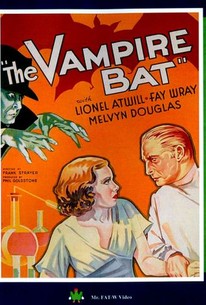 Bloodsucking winged creatures who may take human shape appear to have returned after centuries of dormancy to the middle-European municipality of Kleinschloss in this atmospheric, low-budget thriller from small-scale Majestic Pictures, and the burgomaster (Lionel Belmore) demands answers. With victims scattered everywhere, all bearing the distinctive puncture marks, police detective Karl Brettschneider (Melvyn Douglas) finds himself completely stymied. Brettschneider, who refuses to accept what he considers mere superstition, is not pleased when that eminent physician Dr. Otto Von Niemann (Lionel Atwill) hints that there may indeed be such things as murderous human bats. Herman Gleib (Dwight Frye), the village idiot, meanwhile, just happens to have a fondness for the nocturnal creatures -- "They're so soft!" -- and the villagers, as they are wont to do, grab their torches and commence a manhunt. Poor Herman is destroyed, but there is another killing. And this time the victim is Georgiana (Stella Adams), Dr. Von Niemann's housekeeper, who failed to serve the physician his late-night coffee. ~ Hans J. Wollstein, Rovi

Carl Stockdale
as Schmidt the Morgue Keeper
View All

The movie is no timeless classic, but it's definitely a unique one-off.

An extremely silly film, but with an interesting plot. It's always nice to see Fay Wray on the screen. Melvyn Douglas does some nice work, as does Lionel Atwill, but it's a very poor package that they're wrapped up in that has only the slightest promise.

Quickie poverty row Dracula knockoff about a plague of vampiric activity in a German village: is it a real vampire, bloodsucking bats, or a human killer posing as a nosferatu? The flick features a good cast (Lionel Atwill, Fay Wray, Melvyn Douglas, and Dwight Frye) and it starts with strong Gothic atmosphere, but fizzles out as the plot is revealed.

This movie is kind of silly, and I hated the ending.

The Vampire Bat is not scary at all by any sense of the word, it is actually pretty boring. I have been watching alot of "horror" movies from the 30's and I really didn't enjoy this one. There are very few positives about this movie, one of them being Dwight Frye. This man is a horror legend from the 30's. Also the sound and picture are pretty decent, being from the 30's that is, that was really something that I enjoyed. The plot goes a little something like this... hit it! Well a bunch of people start showing up with their blood being drained. No one in this town knows what is going on or who is doing it. But it doesn't take the town long to point their fingers at the dimwitted Glieb, played of course to perfection by Dwight Frye. Is Herman Glieb innocent? You will have to watch to find out! Yeah thats all that I have to go on, I wouldn't watch this again but I will say that you should see it if you are a true horror fan, just for Dwight Frye's performance. Overall I am going to give this movie a 4 of 10. Like I said... True Horror Fans. S!D