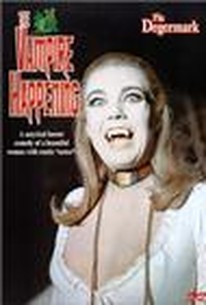 Italian producer Pier A. Caminnecci went to Germany and hired British director Freddie Francis to make this vampire comedy starring his Scandinavian wife, Pia Dagermark (Elvira Madigan). The resultant international mish-mash is neither very scary nor very funny. Dagermark portrays Hollywood actress Betty Williams, who inherits a Balkan castle only to find that her grandmother (also played by Dagermark) was a vampiric witch. There is a great deal of nudity, bad jokes, cheesy visuals, and Ferdy Mayne -- star of this film's superior inspiration, Dance of the Vampires -- as a helicopter-riding Dracula. It's certainly unusual, and horror completists will want to give it a look, but most viewers will find it simultaneously ridiculous and dull, a combination found frequently in Francis' films. ~ Robert Firsching, Rovi

There are no critic reviews yet for Gebissen wird nur nachts (The Vampire Happening). Keep checking Rotten Tomatoes for updates!

There are no featured audience reviews yet. Click the link below to see what others say about Gebissen wird nur nachts (The Vampire Happening)!