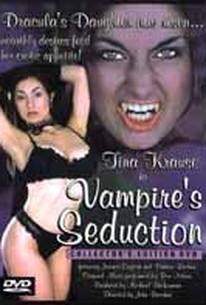 Tina Krause and Debbie Rochon star in this softcore vampire adventure from Seduction Cinema and Ventura Distribution. Directed by John Bacchus, Vampire's Seduction finds Dracula's daughter in present day, scantily clad and with a thirst for lesbians. In order to fulfill her desires, the lady vampire sends Wally Van Helsing -- great-great-grandson of Dr. Van Helsing -- on a quest to round up young women. Several steamy scenes involving topless women ensue. Released in 2001, the film is intended for a mature audience. ~ Matthew Tobey, Rovi

There are no critic reviews yet for Vampire's Seduction. Keep checking Rotten Tomatoes for updates!

There are no featured reviews for Vampire's Seduction at this time.