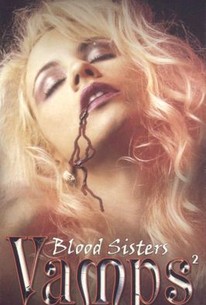 It's a fight to the finish between two tribes of beautiful bloodsuckers in this direct-to-video sequel to Vamps: Deadly Dreamgirls. Heather (Glori-Ann Gilbert) is an exotic dancer who has become a vampire and is working at a nightclub named Vamps, managed by her fiancé, a defrocked priest named Seamus (Paul Morris). Heather and Seamus learn that they have made a powerful enemy in Elizabeth (Amber Newman), another comely female vampire whose sister was killed by the denizens of Vamps years before. Elizabeth is eager to get revenge against Heather and her fellow vampire strippers, especially since Heather and Seamus could possibly bring about the Prophesy of the Redeemer, which would bring an end to vampires once and for all.

There are no critic reviews yet for Vamps 2: Blood Sisters. Keep checking Rotten Tomatoes for updates!

There are no featured audience reviews yet. Click the link below to see what others say about Vamps 2: Blood Sisters!