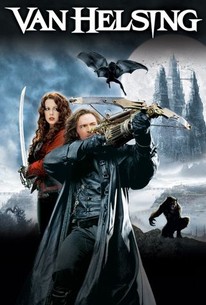 The greatest monster hunter of them all has his work cut out for him as he tracks down three deadly foes in this action-adventure saga. Gabriel Van Helsing (Hugh Jackman) is a man who has dedicated his life to battling evil forces who exist outside the bounds of nature; Van Helsing's work has not always made him friends, and a false accusation of murder still trails him. But when he's summoned to Transylvania at the behest of Anna Valerious (Kate Beckinsale), whose family has been fighting supernatural beings for generations, Van Helsing wastes no time answering her call. There, Van Helsing discovers that the undying vampire Count Dracula (Richard Roxburgh) has put a misshapen creature named Igor (Kevin J. O'Connor) under his spell, and, in turn, has forged an alliance with a hideous monster (Shuler Hensley) who was created by the misguided Dr. Victor Frankenstein (Samuel West). Adding to Anna's burden is her brother, Velkan (Will Kemp), a lycanthrope who becomes a bloodthirsty wolf under the light of the full moon. Van Helsing also co-stars Elena Anaya, Silvia Colloca, and Josie Maran as Dracula's vampire brides. ~ Mark Deming, Rovi

It's this relentlessness of the action and technology that make the film more of a simulated ride. I wouldn't have boarded.

The exteriors are fantastic, the castles mega-looming, and there's a beautiful -- if fanciful -- masqued ball which shows off to perfection the costumes contrived by Gabriella Pescucci.

This is one vampire movie with bite.

The horror flick, at its height, was a lyrical caressing of our fears; by the end of this nonsense, you fear for the well-being of the genre. 'It's dead!'

It's empty calories: There isn't a single nourishing, non-synthetic sequence in the entire movie. Not a scene. Not a line. Not a look.

The humor, most of which comes from a monk as a comic sidekick, doesnt work here either. It just emphasizes how campy the whole premise really is.

Hugh Jackman stars as the sexiest Van Helsing to ever hit the screen. Even more impressive... is his larger than life screen presence and physicality that keeps his character from becoming overshadowed by the incredible amount of CGI and monster effects

If you're prepared to overlook the canon-messing, plus the odd bit of crap dialogue or dodgy CGI, then Van Helsing is surprisingly enjoyable, with several impressive action set pieces.

Van Helsing is the epitome of an escapist movie - the kind that used to be shown on Saturday afternoon. But now, thanks to massive budgets and big-name stars, Saturday comes seven days a week.

Despite (or maybe because of) the nonstop action and the special effects, I looked at my watch a lot. This is too long and the script is nothing but segues from one action, special effect-laden, sequence to another.

By the final scene, all we care about is when Sommers will wrap up his magic act and let us all go home.

Stupid idea for a story, but fun in an idiotic way. I'm embarrassed to say it, but I really liked it -- for a mindless action thriller.

Hugh Jackman, Kate Beckinsale massive slaughter of bad guys. Yeah i like it.