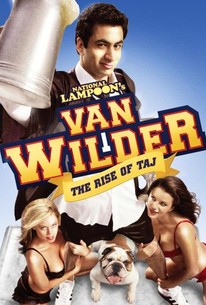 Critics Consensus: A low-brow comedy, minus the comedy.

Critics Consensus: A low-brow comedy, minus the comedy.

Critic Consensus: A low-brow comedy, minus the comedy.

The protégé of the most skilled mischief maker in college history sets his sights on England's prestigious Camden University to offer an informative course in advanced-level shenanigans in this sequel to the 2002 Ryan Reynolds hit that finds that film's co-star Kal Penn crossing the pond to realize his true party potential. Van Wilder's former assistant has learned the ways of the master, and now he's prepared to share his newfound knowledge with the stuffy students of the school known more for academia than rowdy mischief. Of course, by now Taj (Penn) knows that where there's a will there's a way, and there are plenty of fun-loving misfits at this esteemed institute of higher learning who are just looking for an excuse to ditch their studies and blow off a little steam by embracing their inner Van Wilder.

Dan Percival
as Pipp Everett, the Earl of Grey

This is shocking only for its tepidness; except for some raunchy language, it's ready-made for basic cable.

Penn is capable of so much more.

Granted, it's still ****, but with a sweeter odor than usual.

Everything old is old again in this rickety extension of 2002's already rickety Van Wilder.

Lame, horrid sequel is even worse than the first.

Screw Tara Reid! Who needs her in this movie. We've got a cockney girl with huge knockers.

From haphazard editing to clueless cinematography to godawful acting to gaping plot holes to zero laughs to low production values, this sorry sequel has all the earmarks of your classic 'take the money and run' ripoff.

...original star Ryan Reynolds wisely took a pass on coming back for more...

There was a hedonistic amorality and joyous celebration of privilege in the first Van Wilder that's missing from its sequel. That's fine with me. I hated that movie.

Im sorry i just... i JUST dont have the energy for this one.

Wow! This movie is so bad, that if I had the chance to I would go back and wish I had never even seen it at all. Van Wilder 2, not having seen the first, is a complete disgrace, with absolutely no heart or any actual comedy to laugh at!

Not for the squeamish