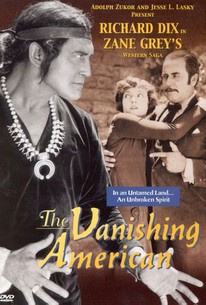 The Paramount team of Richard Dix and Lois Wilson starred in this top-notch silent western in which a Native American is the protagonist. The early silent era devoted many films to the depiction of American Indians, but that trend had not carried over into the screen's third decade, where Indians almost always played villains or were merely background dressing. Based on a Zane Grey novel and filmed partially in Monument Valley, The Vanishing American presented Dix, in what might very well have been his best performance until Cimarron (1930), as a college-educated Native American who only meets with racial intolerance when he returns to a reservation now lorded over by a villainous Bureau of Indian Affairs agent (Noah Beery). Today considered "quaintly" racist despite its good intentions, The Vanishing American must be viewed and compared to other films of the era. It certainly benefits from sincere portrayals of Dix and Wilson, the latter playing a dedicated schoolmarm desired by Dix and lusted after by Beery. According to one modern critic, Jon Tuska, the film was not a political tour-de-force, "but rather a kindly, occasionally sentimental portrayal of the red man as he adjusts to the white man's civilization."

Bernard Siegel
as Do Etin

Critic Reviews for The Vanishing American

For all its manifest faults, The Vanishing American has the elements of high tragedy, which is more than can be said for most epics of the screen.

It was the first feature film to sympathetically tell of the contemporary plight of American Indians.

Audience Reviews for The Vanishing American

There are no featured audience reviews yet. Click the link below to see what others say about The Vanishing American!