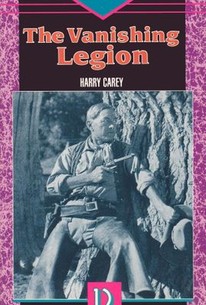 Filmed at Newhall, CA, with exteriors shot at Universal City, Mascot Pictures' The Vanishing Legion became the little company's signature serial. Producer Nat Levine had managed to sign veteran cowboy star Harry Carey, blonde starlet Edwina Booth, and Olive Fuller Golden, Carey's wife, all of whom had recently just barely survived the travails of filming MGM's Trader Horn (1930) under extremely difficult conditions in what was then termed Darkest Africa. Now they were employed in a typical serial story of young Jimmy Williams (Frankie Darro) and his wild stallion (the famously intemperate Rex, King of the Wild Horses), both searching for the mysterious gang that framed Jimmy's father (Edward Hearn) in a murder scheme. The two get assistance from leathery old Happy Hardigan (Carey), who has discovered a plot by the lawless Vanishing Legion to sabotage Caroline Hall's (Booth) ancestral oil company. Behind the shenanigans is a master criminal, heard but never seen and known only as "The Voice." The identity of the villain is revealed only in the 12th and final chapter, "The Hoofs of Horror." Said identity, which of course shall not be revealed here either, was that of a venerable, old character actor who usually played kindly fathers. Of course, Mascot engaged in a bit of skullduggery themselves by having Boris Karloff as a "voice double." Also released in a re-edited feature version, The Vanishing Legion has become synonymous with Mascot Pictures and is the title of a groundbreaking biography of the little studio by Jon Tuska. Sadly, the serial proved the final film for silent screen cowboy Dick Hatton, who was killed in a car accident later in the year. ~ Hans J. Wollstein, Rovi

There are no critic reviews yet for Vanishing Legion. Keep checking Rotten Tomatoes for updates!

There are no featured reviews for Vanishing Legion at this time.