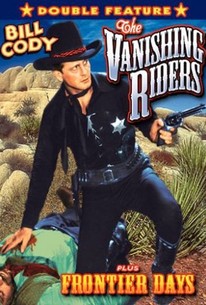 Hiding behind the intriguing title is yet another low-budget Bill Cody Western from poverty row company Spectrum. Looking somewhat the worse for wear, the former silent screen cowboy starred as Sheriff Bill Jones of Cactus City who adopts the young son (Bill Cody, Jr.) of a slain outlaw (Roger Williams). Leaving his job behind, Bill and the kid begin a new life in Silver City, a ghost town "haunted" by a gang of cattle rustlers, the "Vanishing Riders" of the title. Written by the prolific Oliver Drake, Vanishing Riders featured yet another former silent screen hero, Wally Wales, as the leader of the outlaw gang. The film was produced at a ranch belonging to poverty row entrepreneur Trem Carr.

There are no critic reviews yet for Vanishing Riders. Keep checking Rotten Tomatoes for updates!

There are no featured reviews for Vanishing Riders at this time.