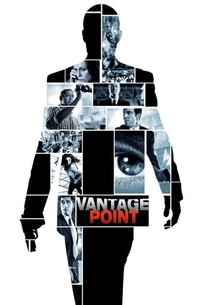 Critics Consensus: Vantage Point has an interesting premise that is completely undermined by fractured storytelling and wooden performances.

Critics Consensus: Vantage Point has an interesting premise that is completely undermined by fractured storytelling and wooden performances.

Critic Consensus: Vantage Point has an interesting premise that is completely undermined by fractured storytelling and wooden performances.

Eight strangers with eight different points of view try to unlock the one truth behind an assassination attempt on the president of the United States. Thomas Barnes and Kent Taylor are two Secret Service agents assigned to protect President Ashton at a landmark summit on the global war on terror. When President Ashton is shot moments after his arrival in Spain, chaos ensues and disparate lives collide in the hunt for the assassin. In the crowd is Howard Lewis, an American tourist who thinks he's captured the shooter on his camcorder while videotaping the event for his kids back home. Also there, relaying the historic event to millions of TV viewers across the globe, is American TV news producer Rex Brooks. As they and others reveal their stories, the pieces of the puzzle will fall into place--and it will become apparent that shocking motivations lurk just beneath the surface.

Although based around a familiar, Rashomon-style concept, Vantage Point ratchets up its intensity so effectively that the lack of originality hardly matters.

Watchably silly at best, it's the political thriller as an unintentional comedy of errors - 24 meets Noises Off.

Vantage Point might sound intriguing on paper but it's all gimmick and not a lot of substance.

The stories are cleverly interwoven, with a couple of unexpected twists, and the patient viewer is rewarded with a doozy of a car chase in the last reel.

Although mounted with no little efficiency by director Pete Travis (who previously made the TV drama-doc 'Omagh'), the narrative enterprise actually hides a one-dimensional world view, with civilian casualties mere background set dressing.

Some okay thrills with good performances and some smarts. But the last reel plunge spoils things.

Collapses under the weight of predictability.

The stylishly slick action flick that doesn't exactly tread into unfamiliar territory, but is still quite entertaining.

The film's climax has to rank as one of the silliest car chases ever captured on film.

The most intrusive of these problems is the acting.

Is it too much to ask for procedural thrillers like Vantage Point to connect all their dots before the closing credits?

A very good enjoyable action/thriller with a good cast. There may be a few plot lines you think that wouldn't happen etc but overall seeing the different interactions between the main characters from each view point was good. It has some slight twists and a pretty damn good car chase too!

The premise is interesting, even if not original at all, and there are great action scenes full of energy here to hold our attention, but the film relies on numerous coincidences and the actors are mostly wasted playing poorly developed characters.

[img]http://images.rottentomatoes.com/images/user/icons/icon14.gif[/img] An average storyline but an entertaining thriller. By no means impressive but the way the story was told was actually quite well done. It is cleverly told by different characters perspectives and is suspenseful like a good action thriller should be.

A completely new concept to me to film the movie shooting the same part from several different characters views till you ran it all together at the end. A good action ride and kept me watching the whole time.