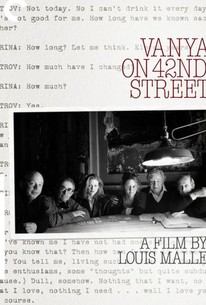 Critics Consensus: Beautiful performances and the subtle hand of master Louis Malle make this adaptation of Chekov's Uncle Vanya an eccentric presentation of an enduring classic.

Critics Consensus: Beautiful performances and the subtle hand of master Louis Malle make this adaptation of Chekov's Uncle Vanya an eccentric presentation of an enduring classic.

Critic Consensus: Beautiful performances and the subtle hand of master Louis Malle make this adaptation of Chekov's Uncle Vanya an eccentric presentation of an enduring classic.

Emphasizing the spoken word and featuring virtuoso acting, this movie presents an austere production of Chekhov's classic stage drama Uncle Vanya filmed in an abandoned theater on New York's 42nd Street. As the play unfolds, the stories of the residents and visitors at a 19th-century Russian country estate gradually emerge.

Andre Gregory
as Himself
View All

It's amazing it has taken Wallace Shawn, Andre Gregory, and director Louis Malle more than 10 years to collaborate again. It was worth the wait, though.

The drawback, however, is that the actors chew the scenery in true stagecraft fashion, which, on film, induces regular wincing and a wish that they would hand out the valium and take it easy.

The performances are precise, the language is alive and well spoken and the setting is striking, but Vanya on 42nd Street still suffers rather heavily from the limitations of filmed theater.

Malle adeptly eases us into the play so we can't tell at what precise moment Chekhov takes over, an ambiguity that becomes the film's triumph as well as its key limitation.

There's more power here than in all the multi-million dollar fireworks of Hollywood.

The elegant understatement of this production turns it into a livelier experiment, a fluent, gripping version of one of Chekhov's more elusive plays.

Louis Malle's swan-song, while perhaps not his most noteworthy work, happens to contain a priceless amount of cultural significance, a romantic document of the ultimate theatrical experience.

The alchemy of Gregory's staging and Malle's direction turn what could have been an exercise in canned theater into something very nearly sublime.

A deeply moving, inspirational secular-sacred experience both for its beautiful embodiment of Chekhov's story of unmoored souls and for the beauty of the greatest collaborative art form, practiced with pure joy and for love. [Blu-ray]

... a record of a creative collaboration that has a life of its own, at once documentary, filmed rehearsal, play within a play, and private production restaged for a camera...

Reuniting with Andrew Gregory, Louis Malle, in what became his swan song, has made a modern, captivation version of the Chekhov play.

Not entirely successful, but undeniably brave.

A group of actors perform Chekhov's Uncle Vanya. Andre Gregory and Wallace Shawn combined with director Louis Malle to create one of the great talk-only films, My Dinner with Andre, and now they add David Mamet translating Anton Chekhov to the mix, and the result is just as compelling. By itself, Vanya is a great character drama, and what Malle and company show is that great material requires great actors, not necessarily beautiful scenery. You probably wouldn't cast impish Wallace Shawn in the main role of Vanya opposite the younger and "beautiful" Jullianne Moore, but it works because Shawn's talent as an actor goes beyond his looks. The rest of the actors are equally good, including Moore, whose work usually fails to compel me. Overall, this is a great introduction to one of Russia's greatest writers.

Should be seen in a theatre for the full appreciation. This is the most original telling of Uncle Vanya that I have seen. What we are seeing is a gripping theatre performance in an unmade set without costumes and with the pleasing sounds of New York in the background. It works!

It strips Chekhov to its bare bones and its that simplicity of the production as well as the upfront acknowledgement of the artifice of this performance and the theatre in general that makes this work so well. I also like that Louis Malle just decided to film what the actors and Andre Gregory had put together over their extensive rehearsal and improvisation process without trying to transform it into something else, because whats there is pretty damn remarkable. Its some of the very best ensemble work I've ever seen.

Amazing. Louis Malle makes a film about the love for the theater, and the love for the art, and the joy, the insight that it provides to life. All the cast is exemplary, but I think Brooke Smith is the revelation here. It takes a while to grow on you, but if you go past the first few slow minutes, you're about to experience a real journey into the heart of the thespian mystery.