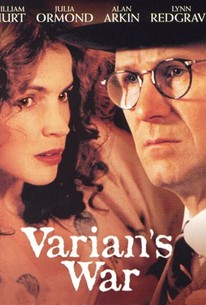 Varian Fry was an American journalist who was convinced, years before America become directly involved in World War II, that Nazi Germany's abusive policies against Jews and other "outsiders" would soon have grim consequences around the world. But Fry had a hard time convincing other Americans of the extent of the Nazi threat in 1938, and he eventually relocated to Germany to cover the rise of the Nazis in hopes of bringing his warning call to the world. Fry's efforts earned him the respect of Europe's intellectual and creative community, and in 1940, Fry aligned himself with a number of American organizations as he began working to smuggle refugees out of Europe and to safety. Along with thousands of ordinary citizens, Fry helped to save Marc Chagall, Heinrich Mann, Max Ernst, Andre Benton, and a number of other important artists and writers from execution at the hands of Hitler's henchmen. Varian's War is a made-for-cable feature based on Fry's extraordinary true story; William Hurt stars as Varian Fry, with Julia Ormond and Matt Craven highlighting the supporting cast.

Dorothée Berryman
as Fanny
View All

What they've come up with is a quality offering that turns an unheralded figure into a cinematic hero, a good -- but could have been great -- story about an American intellectual who in unlikely fashion helped prominent artists escape Vichy France.

An American intellectual arranges the escape of European intellectuals from unoccupied France during the beginning of WWII. Once again, William Hurt turns in a fantastic performance. As Varian, he must alternatively play the inspirational soldier, the gay fop, and the determined crusader, and he does it all with the characteristic Hurt charm and distinctive mannerisms. And next time you see a Hurt film be sure to notice his unwavering gaze, signifying he is constantly in the moment and present in the scene. The film itself leaves something to be desired. Varian's mission, to rescue only intellectuals and artists, is definitionally elitist, and I wish there was more attention or recognition of this fact in the film's action. All we get are brief scenes of Varian and his cohorts lamenting that they can't take all who need to flee, but there is no substantive challenge of his character. Also, director Lionel Chetwynd's Nazi Germany is not nearly as dangerous or brutal as other depictions. Perhaps Chetwynd expects us to bring to the film pre-conceived notions of Nazi Germany and feels no necessity to show the horrors. But what comes across instead is a slight menace, devoid of the real danger facing these people. And as the characters escape, they do so through the pastoral of scenes. Such a depiction doesn't reflect what reality must have been like and certainly doesn't equate to compelling drama. Overall, see this film to see why William Hurt is such a strong actor, all the while attempting to ignore the structural and thematic issues.