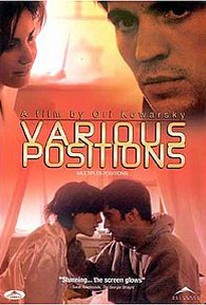 A young college student begins to question his family's expectations of him -- as well as his own expectations of himself -- in first-time Canadian director Ori Kowarsky's film Various Positions. Law student Josh Szchevisky (Tygh Runyan) -- eagerly following the educational path his parents (L. Harvey Gold and Marie Stillin) have plotted for him -- begins preparing to spend the Passover holiday at home when he meets a hot young coed named Cheryth (Carly Pope). The two embark on a quick and intense romance, which leaves Josh fearful of announcing his relationship with a non-Jew to his devout family. As Josh eventually decides to bring Cheryth to dinner, his father and younger brother Tzvi (Michal Suchanek) give her enough grief to inflict some damage on Josh and Cheryth's fragile relationship. Furthermore, their treatment of Cheryth also gives Josh pause as he questions how his family's desires for his future conflict with his own. Various Positions was selected for inclusion into the Panorama Canada program at the 2002 Montreal World Film Festival. ~ Ryan Shriver, Rovi

Though Kowarsky's ambitions sometimes get the better of him, his indie drama boasts some freshness and a complex, nuanced take on both college romances and parent-child warfare.

With mediocre performances from everyone and an episodic lurch to the flow of the piece, and you have a film that fails.

There are no featured reviews for Various Positions at this time.