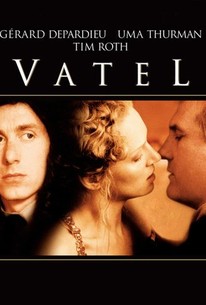 In 1671, Francois Vatel, a master chef, entertainer and steward, is hired by the Prince de Conde to prepare an important feast for the upcoming arrival of King Louis XIV. However, it will take nothing short of a miracle to prepare a fete fitting for royalty while Conde's provinces rest on the verge of financial ruin. Vatel, however, is a culinary genius possessing a heightened sense of resourcefulness with which to resolve each new crisis that threatens to damper the festivities. He is caught off guard by only one unforseen factor -- the ravishing beauty of royal newcomer, the regal Anne de Montausier. Not only has she caught the king's eye but also those of Vatel and the king's nasty aide the Marquis de Lauzon. To the monarch and the marquis she is but a sexual conquest, but Vatel and Anne recognize the decency and honesty in each other, qualities in short supply in the rarefied world in which they exist.

Nathalie Cerda
as The Queen Marie-Therese

Patty Hannock
as Duchesse at the Banquet

Fiona Curzon
as Woman at the Banquet

Helen Later
as Servant with Flowers

Capucine Daumas
as Danseuse
View All

It's too turgid with its own upholstered pomp.

A costume drama with far more costumes than drama.

A landmark in world cinema not merely for sheer grandeur but also attention to dense authenticity.

An improbable, if sumptuous, bore.

Period costume dramas are always expected to offer opulent pageantry, but in the case of Vatel, that's all there is.

The richest and most intriguing portrait of period piece duty and subjugated happiness since The Remains of the Day.

A costume drama with all costume and no drama.

It lacks an understanding of the harmonies and contrasts in the very society he is trying to expose to ridicule.

A quite entertaining costume drama filled with intrigue and debauchery. Integrity was highly prized and rarely found in the court of Louis XIV. Vatel (Gerard Depardieu) is in charge of providing lavish entertainment and banquets for the king's visit and discharges his duties without flaw. So much so, that his services are required at Versailles, but at a cost too dear for this man of humble origins. The cast is superb (Thurman and Roth bear special mention), the scenery is extravagent, and the story has enough twists and turns to keep the viewer engaged for its near two hour length. The costuming and sets alone are worth the price of admission. At a time when a king's displeasure was paid for with one's life, and honor often took a back seat to expediency, a man like Vatel invited envy as well as admiration. And in rare instances the affections of a lady.