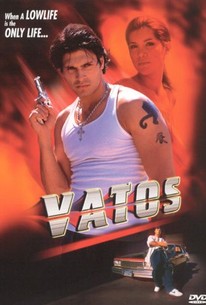 An ex-convict determined to go straight finds himself unwittingly drawn back into the lucrative drug trade in this tense family crime drama from Barrio Wars director Paul Wynne. Gererdo is a former drug runner who has served his time, and now wants to live a quiet life with devoted girlfriend Luchana. In order to make that happen Gerardo turns his back on the drug trade, instead landing a job in the mailroom of his brother's successful law firm. What Gerardo fails to realize, however, it that the outwardly legitimate law firm is actually run by notorious cocaine dealer Miguel. Enraged by the fact that he has been tricked back into the drug trade, Gerardo organizes a sting designed to expose Miguel for the criminal that he truly is. But when the sting goes horribly awry and Gerardo becomes subject to Miguel's wrath, devoted brother Jose picks up the gun a prepares to exact a little vigilante justice.

There are no critic reviews yet for Vatos. Keep checking Rotten Tomatoes for updates!

There are no featured reviews for Vatos at this time.