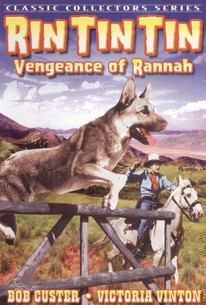 The stars of the popular Mascot serial Law of the Wild, Rin-Tin- Tin, Jr. and Bob Custer, were reunited for this remake of a 1915 Selig Polyscope western. When the owner of the Twin Oaks Stagecoach turns up missing and is later found murdered, investigator Ted Saunders (Custer) believes that the dead man's faithful dog, Rannah (Rinty, Jr.), can identify the killer. Rannah and Saunders team up with pretty Mary Warner (Victoria Vinton), the murdered stage owner's daughter, and the trail leads them -- after many less than exciting adventures -- to Twin Oaks' outwardly respectable banker, Norcross (Roger Williams). A survivor from silent Westerns, Bob Custer was forced to take billing below the dog in this, his penultimate film. He retired after the terrible Santa Fe Rides (1937) and later became a building inspector.

Critic Reviews for Vengeance of Rannah

There are no critic reviews yet for Vengeance of Rannah. Keep checking Rotten Tomatoes for updates!

There are no featured reviews for Vengeance of Rannah at this time.