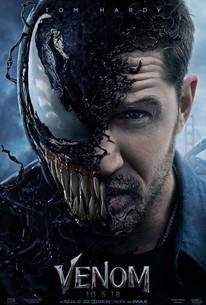 Critics Consensus: Venom's first standalone movie turns out to be like the comics character in all the wrong ways - chaotic, noisy, and in desperate need of a stronger attachment to Spider-Man.

Critics Consensus: Venom's first standalone movie turns out to be like the comics character in all the wrong ways - chaotic, noisy, and in desperate need of a stronger attachment to Spider-Man.

Critic Consensus: Venom's first standalone movie turns out to be like the comics character in all the wrong ways - chaotic, noisy, and in desperate need of a stronger attachment to Spider-Man.

Investigative journalist Eddie Brock attempts a comeback following a scandal, but accidentally becomes the host of an alien symbiote that gives him a violent super alter-ego: Venom. Soon, he must rely on his newfound powers to protect the world from a shadowy organisation looking for a symbiote of their own.

Mac Brandt
as Jack the Bartender

Buddy Rahming
as Businessman
View All

“Rotten Tomatoes Is Wrong” About… Venom
What the Morbius Trailer Tells Us About A Potential Sinister Six Film
Is Andy Serkis the Best Choice to Direct Venom 2?

The film devotes way too much time to exposition (the first act feels like it goes on for about an hour), but once it gets going it's decent fun.

The result is so infantile that you barely care to wait for the mandatory mid-credit Marvel teasers.

There's a lot of fun to be had if you go in and turn your brain off and go with it.

A waste of a perfectly good Tom Hardy.

The movie becomes about Eddie and Venom coming to an arrangement. There is a lot of humour, including a sly riff on the Batman movies from Marvel rival DC Comics.

This is the one with the most teeth and most tater tots.

The first half hour of the film feels very rushed, as if the director is trying to get all the backstory and all the set up out of the way, sucking away all the emotional investment that the viewer is supposed to have.

Venom offers a nice reminder that there's still a lot of entertainment to be had in a film that just wants to be crazy fun -- and then delivers on that promise.

A flawed beast that feels 10 years out of time....

Another day, another comicbook movie. When will it end?? So after the somewhat dismal iteration of Venom in 'Spider-Man 3' Sony went back to the drawing board. Initially plans seemed to revolve around having Venom get in on the action in the rebooted 'The Amazing Spider-Man' franchise, but that failed. There were ideas to have Venom kickstart his own franchise which would share the same universe as other Marvel characters. There was also an idea to have Venom in 'Spider-Man: Homecoming'. There was also an idea to have a low budget adult version. Whatever rumours or stories we can all agree that for some reason the powers that be really wanted a Venom movie. So eventually we got this movie. Whilst on a deep space mission a corporation led by the evil Carlton Drake (Riz Ahmed) manages to discover a comet covered in symbiotic lifeforms. Bringing four specimens back to Earth one escapes and causes the shuttle to crash which unleashes it. In the meantime Drake starts to experiment on humans, trying to get the aliens to match with a host. The aliens need an oxygen-breathing host to survive. As you might imagine Eddie Brock (Tom Hardy) eventually gets into this corporations HQ (with help from an employee) and is accidentally taken over by one of the symbiotes. We then follow Brock as he adjusts to the alien inside him, Drake and his goons coming after Brock, and eventually the last surviving symbiote taking over Drake resulting in Riot. Now I'm not up on every Marvel character so I don't know how accurate this movie is to the original source material. I'm guessing there have been many changes. But I do have some large queries. The symbiotes are looking for a planet with hosts they can take over and consume, OK. So what exactly is their plan of action for Earth? Eat every human and...? Then what? Is this all they do? At the start of the movie we are led to believe that it's hard to find the correct match for the symbiote. Drake is going through loads of human test subjects trying to find a human that will bond with the symbiote. OK that's fine. But at the same time, the symbiote Riot seems to be jumping from human to human no probs at all. Add to that, later on in the movie the symbiote Venom seems to have no problem taking over Brock's ex-girlfriend and a dog. Riot also takes over Drake no problems too. I dunno if I missed something but this just seems inconsistent because we are led to believe that it's hard to find the perfect match for the symbiotes, and when Venom finds Brock it's treated like a shocking breakthrough. I also found kinda odd that the aliens have names from our human language. I thought (in the comics) Brock came up with the name himself once combined with the symbiote (?). But in this movie the symbiotes seem to already have their names. I also thought Venom changed its mind way too quickly about Earth and humans. The symbiote seems to take the choice of betraying its own very easily purely based on liking Brock. And it had only been combined to Brock for a day or so, maybe not even that! Far too convenient for me. Aside from that the movie is generally incredibly dated in style and outcome. This [b]really[/b] feels like a movie that came out in the 90's. It looks like a movie that came out in the 90's. The CGI ranges from really sweet lookin' to really terrible lookin'. Close-ups of Venom are great, most everything else is bad. Most of the action sequences are woefully bad in both execution and visuals. The stunts are clearly stunts. There are tonnes of obvious greenscreen shots. Venom looks rubbery at times and plastic at others. When Venom fights Riot its an indistinguishable CGI mess. And the bad guys are astronomically cliched. This is the present day 'Spawn'. Yet despite all that, for some reason, I kinda liked this. I like that they tried to make this somewhat dark and gritty, and for the most part, they succeeded. The start of the movie is quite eerie, playing up some horror tropes. And Hardy definitely helps with his unhinged, dirty, druggie-esque performance. Personally I think they should have gone for broke with an all out R/18 rated flick because the head biting scenes needed to be seen. As they stand its stupid because there's no blood or gore and I'm pretty sure onlookers would be more horrified (the Asian shopkeeper at the end much?). But yeah, can't quite put my finger on it but I sorta liked this. Kinda reminded me of the trashy mid 90's flicks I'd see at my local Odeon on a Wednesday afternoon. Its not a good movie, its legitimately bad with poor...everything truth be told. Still, in an odd way, this is just...dumb fun.

I suppose you have to be a big fan of the Venom comics to appreciate this. And even then, were you not hoping for something...more? Not one interesting or relatable character in sight, a really odd and awkward sense of humor, action scenes by the numbers, mediocre CGI of ridiculously silly creatures. There is no level on which this works. And worst of all, this was a big hit and there'll be more. The Marvel Cinematic Universe does play in entirely different leagues than this drivel.

This is a superhero movie that certainly has fun elements, but the story ... they dropped the ball, plain and simple. I actually felt sorry for Tom Hardy and Michelle Willaims, forced to sit in the figurative baggage car of the Marvel movie money train. And yet, despite the many, many flaws, it is a superhero movie. So, any port in a storm.

Forceful, cringe-worthy CGI, dialogue and humor, Venom needs more than just its witty, charming chemistry from Hardy and his symbiotic counterpart to save what seems to be just another sub-par entry in Sony's attempt to salvage what universe it has or is trying to create. 2.3/5