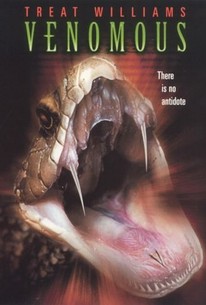 At a secret laboratory in the Mojave Desert, a renegade scientific unit of the U.S. military is working on a top-secret project that involves breeding poisonous rattlesnakes that develop a highly contagious virus. But enemy terrorists, in a botched effort to steal the snakes, destroy the lab, releasing the rattlers into the wild. Years later, an earthquake unleashes hordes of aggressive, virus-infected rattlesnakes on a remote town. As the viral epidemic begins killing town doctor Henning's (Treat Williams) friends and family, corrupt military officials plan to blow up the town with a massive firebomb to cover up the incriminating source of the diabolical disease. With the Stealth plane carrying the bomb headed Dr. Henning's way, and with the town littered with dying citizens, Henning has to find a way to save the day -- and perhaps the planet.

Kim Ray
as Reporter No. 2

...feels like one of those cheesy TBS disaster movies.

It looks like Tremors proceeds like Outbreak, and stops in Slither territory, with all the tissue rejection such a union predicts.

There are no featured audience reviews yet. Click the link below to see what others say about Venomous!