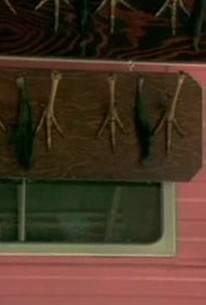 For his second documentary feature, Errol Morris originally set out to chronicle Vernon, FL, because it had the highest rate of a particular sort of insurance fraud -- dismemberment performed for profit -- than any other place in the country. Nothing of that original idea survives in the film itself. Instead, Morris seems perfectly content letting the camera roll in front of the other eccentrics he found there, using his trademark approach of simply letting his subjects do the talking themselves. Many of them exhibit unusually close relationships to animals, including a turtle keeper, a worm farmer, and most memorably, an extremely enthusiastic turkey hunter. Other highlights include a sermon offering a close reading on the significance of the word "therefore" and a couple with a jar of sand from White Sands, NM, that they insist, thanks to radiation, has begun to multiply.

Albert Bitterling
as Himself

Claude Register
as Himself

Snake Reynolds
as Himself

Henry Shipes
as Himself

Morris' first two films are as carefully composed and thematically complex as any scripted drama.

Vernon, Florida feels more like an endearingly backwoods mélange, complete with possums, antlers and the tranquility of the southern swamps delicately shaded by the overlooking weeping willow.

Still a quirky, deadpan classic even if it isn't aging nearly as well as you'd hope.

If anything, it confirms the cliché that truth is stranger than fiction. You couldn't make up these interviews.

...something truly special, both funny and moving, strange and captivating.

a Platonic dialogue in that it's suspiciously like a monologue disguised as an exchange.

engrossing and rather endearing

Vernon at first appears to be an exploitative display of the fluent eccentricities of a rural compendium and becomes collectively applicable, even relevant.

As an almost follow-up to the strangely appealing Gates of Heaven, this is a simple documentary that does have its moments and yet seems a lot more interested in mocking its eccentric subjects than having anything really interesting to say about their mundane lives and experiences.

While I love Morris, this is not one of his most impressive documentaries. While it does feature an oddly fascinating cast of characters, it could have used a bit more focus. Something to tie these disparate subjects together. Again, Morris does not mock his interviewees. True to it's name, this film is about the lives of the inhabitants of Vernon Florida. Although it may not be as enthralling as the Thin Blue Line or the Fog of War, it is still definitely worth checking out.

Documentary about small town life in Florida in 1981. Engaging.

Best quotable lines in any movie ever. Period. You will laugh your face off, then feel bad about it. I love this movie. Each time you watch it, you progress in the characters you like, till you settle on the turkey hunter, old guy with jewl, old man with turtle, and who can not love the man with two shells under the house.