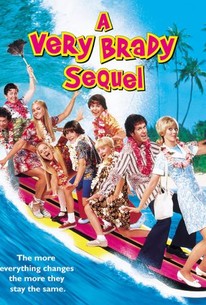 Like its lively predecessor, The Brady Bunch Movie (1995), this mild comic send-up takes its characters and situations from the popular family sitcom of the 1970s, The Brady Bunch. Set in the '90s, it is filled with in-joke references to American pop culture. However, one need not be familiar with the original series in order to enjoy this film. Bad guy Trevor Thomas (Tim Matheson) is posing as supermom Carol Brady's long-dead first husband Roy Martin. He claims to have been amnesiac and made unrecognizable by plastic surgery after suffering disfiguring injuries, but in truth, he is on the hunt for a very valuable artifact, an ancient Chinese horse carving which Roy sent to his family from the field. Because of the family's sheer niceness, they could never imagine such deception, and husband Mike Brady (Gary Cole) welcomes him into their midst. This causes Roy no end of frustration, as not only must he live with this incredibly sweet and cheerful family while he searches for the carving, but he must endure having his ill-tempered sarcastic jibes go completely unrecognized. When Carol (Shelley Long) is kidnapped, the whole family goes a-hunting.

Rosie O'Donnell
as Herself

Sue Casey
as Art Patron No. 1

Gregory White
as Art Patron No. 2

David Ramsey
as Brent the Lifeguard

Phil Buckman
as Jason the Lifeguard

A considerably better second installment than one usually encounters.

As a satire of a sitcom that wasn't funny, it's often at its funniest when it's purposely stale.

A Very Brady Sequel isn't great, but it's enjoyable.

No incarnation of the Brady Bunch, no matter how cleverly satirized, can use up an hour and a half's screen time without making the audience feel like they've overdosed.

I didn't laugh much during A Very Brady Sequel, but I did smile a lot.

I love this movie. The Greg/Marcia "we're not really related" storyline still cracks me up 20+ years later.

Second far-out spoof is just as neat-o and fun.

It's fluff, but that's what you expect from the Bradys -- well, that and Astroturf, anyway.

Fun while I watched, but twice is enough.

As big a surprise as the first flick was. The self-mocking tone helps a lot.

A Very Stinky Sequel to A Very Crappy Original.

Lol, how can you not love these cheesy movies, as horrible as they are, Gary Cole brings it.

This sequel to "The Brady Bunch Movie" continues the funny contrasting of the 70's family with modern life, but goes one further by introducing a scammer (Tim Matheson), who tries to take advantage of the family's good will by claiming he is the long-lost husband of Mrs. Brady (Shelley Long), in order to swipe the family's hidden treasure. There are many more tributes to classic Brady Bunch TV episodes, with unexpected twists thrown in. There's the great sub-plots of Greg and Marsh being attracted to each other, and of Jan and her imaginary boyfriend. It's a funny little movie, which has the family going to Hawaii and finding a Tikki-Idol, just like on TV. Very funny once again.

Funnier than the first.