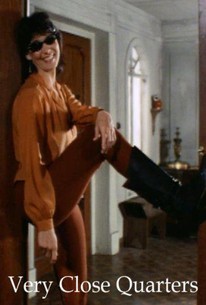 In this comedy, thirty-one people share a single communal flat (with only one bathroom) in Moscow. One of them is an unwed mother with a grown daughter (also a tenant) who tries to save her daughter from a similar fate by finding her a suitable match -- her daughter's wealthy boss, who unfortunately has a serious drinking problem.

Kathleen Doyle
as Irena
View All

There are no critic reviews yet for Very Close Quarters. Keep checking Rotten Tomatoes for updates!

This is obviously a low budget independent movie, you can see the mics and lighting equipment most of the time. Anyway, the story is pretty good for a predictable romance. It's a little different as it takes place in a Russian communal living apartment. There are some funny jokes because of the setting, but overall it's just an okay romantic comedy.