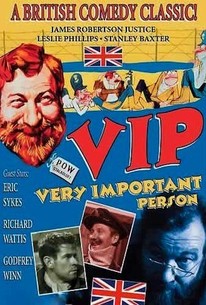 Very Important Person is an amusing British comedy set in a German POW camp during World War II. Sir Ernest Pease (James Robertson Justice) is a self-important professor with a bloated ego and a lightning put-down. When he is flown over Germany disguised as a navy officer to check out the effectiveness of one of his radar inventions, his plane is shot down and he lands in the POW camp. All sorts of misunderstandings arise, since the other prisoners suspect him of being a spy. In the meantime, there are the expected clashes of wit between the British prisoners and their dour German captors and the inevitable camp-organized concert. In the midst of these activities, the professor is challenged to find a way to escape. ~ Eleanor Mannikka, Rovi

Godfrey Winn
as Himself an Interviewer

What's really wrong isn't so much the film's tastelessness as its general lack of talent for comedy: a depressingly national lack, in film circles.

There are no featured audience reviews yet. Click the link below to see what others say about Very Important Person!