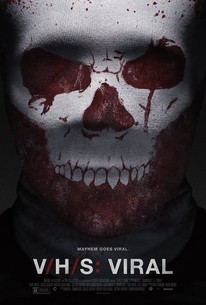 Critics Consensus: V/H/S/: Viral is hardly a sensation as it cycles through the franchise's least frightening vignettes yet.

Critics Consensus: V/H/S/: Viral is hardly a sensation as it cycles through the franchise's least frightening vignettes yet.

Critic Consensus: V/H/S/: Viral is hardly a sensation as it cycles through the franchise's least frightening vignettes yet.

A police chase after a deranged ice cream truck has captivated the attention of the greater Los Angeles area. Dozens of fame---obsessed teens flock to the streets with their video cameras and camera phones, hell---bent on capturing the next viral video. But there is something far more sinister occurring in the streets of L.A. than a simple police chase. A resounding effect is created onto all those obsessed with capturing salacious footage for no other purpose than to amuse or titillate. Soon the discovery becomes that they themselves are the stars of the next video, one where they face their own death. (C) Magnet

Blair Redford
as Himself (segment "Dante the Great")

Jessica Serfaty
as Herself (segment "Dante the Great")

Carrie Keagan
as Herself (segment "Dante the Great")

Cory Rouse
as Himself (segment "Dante the Great")

Heather Hayes
as Girl In Bed (segment "Dante The Great")

I was mostly waiting for it to end.

I couldn't wait to hit eject on this whole jittery mess.

I recognize that it's part of the great horror tradition to beat a marketable name into the ground, but that doesn't make up for the disappointment.

A film that contains some of the sloppiest, most ineffective filmmaking I've seen all year.

A sequel so slapdash and ineffectual that its army of directors-six of them total, counting the poor sucker whose contribution got axed-might well be accused of intentionally burying the franchise.

[Its] pleasures barely compensate for the vapidity of V/H/S: Viral's sketches.

While this is the only portion of this franchise entry to remotely deal with this motif, it's also the least effective, lacking in any real kind of cohesive design.

I think aside from the shorts being more nonsensical and not even remotely scary, the thing that upset me the most was the overarching storyline of "Vicious Circles."

Like any franchise, a third outing is difficult to pull off yet, and such is the case here, with few ample rewards to be found.

As a collective, there's great, good and average to be had here. It's always a risk run with these anthologies, but the audience is there for them and Viral is a good addition to the series.

Not nearly as consistent as its predecessors, but at least two of the segments are quite solid.

After much white noise and other loud sounds along with annoying picture fluctuations, the individual horror segments begin. None of them are impressive.

Following on from my stle of review from previous entry, V/H/S/2, I'll just bne giving my quick thoughts segment by segment, rather than the whole thing (star rating is still for Viral overall though). Vicious Circles: Of the various framing devices found across the V/H/S franchise, "Vicious Circles" is the best/makes the most sense, but it wasn't great or anything. Dante the Great: The most fun of the entries across the whole series. It does stand out in a bad way a little bit, firstly because it's a combination of fake "found footage" and fake "documentary" which... Like it's weird to have sat through all these shorts and then suddenly have a guy giving an interview to a camera crew, and secondly because I think calling it horror is a stretch. More of a... Fantasy-action-comedy with some heavy gore right at the end. Parallel Monsters: Has the same problems as the previous film's "Safe Haven" entry, but fewer pros to counterbalance it. Could probably be explored in a full length movie to better effect, but even that I'm unsure about. Bonestorm: The silliest and worst acted of the entire franchise, which truly is saying something. Would probably make more sense as something outside of a V/H/S film, say... playing silently on a loop on a TV in a skateboard shop, for instance. Gorgeous Vortex: The "hidden" V/H/S: Viral entry is an odd one. The only thing it has going for it is also the dumbest thing about it. It's a 15 minute movie that is entirely aesthetic in value, the first and only entry with good video quality. But this is supposed to be a collection of crappily filmed, glitchy footage, copied over to VHS tapes - so in what universe does it make sense?

Radically departing from the series format, V/H/S: Viral is an inexplicable mess that's appallingly bad. The film doesn't follow its own rules, as a lot of the videos don't conform to the conventions of found footage (and some of the videos aren't even found footage). And this might be excusable if the videos were any good, but most of them aren't. V/H/S: Viral doesn't know what it's doing, and ends up turning out garbage.

The third installment in this fairly admired cult series, is not only the worst in the series, but maybe the worst film I've been subjected to in a year that has already seen two Adam Sandler and three Kevin Hart movies. Read the rest of my review at: http://www.examiner.com/review/v-h-s-viral-worst-film-of-the-year Follow me on Twitter @moviesmarkus

Dante: Welcome to the show! One certainly cannot accuse the V/H/S series of not wanting to evolve. Each film serves as a horror anthology based around the idea of genre directors using the 'found footage' to put together some extremely messed up films, but this series has also attempted to grow its mythology and find new and wilder approaches to the short films. The first V/H/S was marred by its long runtime and general nastiness as far as a majority of the characters, both protagonists and antagonists were concerned. V/H/S 2 was a major step up, as it was shorter, scary, well-produced, and still very extreme. Now we have this third feature which is a bit of mixed bag. On the one hand, it is very well-produced and shows a lot of creativity. On the other, a large focus on the connective tissue between the individual films really brings things down, along with the very evolution of the central conceit, which may be controversial to 'found footage purists.' read the whole review at thecodeiszeek.com