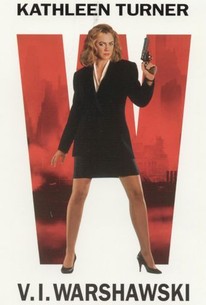 Critics Consensus: With V.I. Warshawsky, Kathleen Turner proves more than up to the task of leading a cop thriller -- it's the script that sadly isn't up to snuff.

Critics Consensus: With V.I. Warshawsky, Kathleen Turner proves more than up to the task of leading a cop thriller -- it's the script that sadly isn't up to snuff.

Critic Consensus: With V.I. Warshawsky, Kathleen Turner proves more than up to the task of leading a cop thriller -- it's the script that sadly isn't up to snuff.

Kathleen Turner stars as V.I. Warshawski in Jeff Kanew's film version of the hard-boiled detective character from Sara Paretsky's series of crime novels. Warshawski is a freelance private investigator in Chicago, who lives the part of the hard-boiled detective. But in her heart of hearts, she is a softy. One night, while she is drinking at her favorite bar, she meets an ex-Blackhawks hockey player named Boom-Boom Grafalk (Stephen Meadows). The two connect and a romance appears to be in the making. But Warshawski is nevertheless surprised when Boom-Boom appears at her doorstep later that night with his 13-year-old daughter, Kat (Angela Goethals) in tow. He asks Warshawski if she could watch her and Warshawski agrees. Later that night, Boom-Boom is killed in a boat explosion and Kit hires Warshawski to track down her father's killer.

Turner, with her leonine sexiness, remains a radiantly adult actress. She deserves better than this kid-stuff thriller.

"V. I. Warshawski" has a breezy style and a serviceable, even surprising detective plot. And it has Ms. Turner, who makes the most of V. I. Warshawski's sardonic humor.

The film looks as if it were shot through ripped pantyhose. It took three writers to craft a script of unvarying cliches. And the direction, by Jeff Kanew, is all you'd expect from the hack who brought forth Revenge of the Nerds and Troop Beverly Hills.

Mistakenly believing that it can succeed on nothing but the notion of a woman doing a "man's job," V.I. Warshawski is zilch in the plot department; most half-hour detective dramas on television have more compelling story lines.

Kathleen Turner fits the character more closely than I would have imagined.

Kanew, who injected some imagination into the campus comedy routine with Revenge of the Nerds, can't manage the same with the gumshoe genre.

Turner's Warshawski is bitingly hilarious, brazenly sexy, and always the smartest one in the room.

Turner wants to play up Warshawski's detective instincts while Disney would rather ogle with the intensity of a Mormon, unsure how to successfully launch a franchise like this without alienating male audiences.

As inelegant as its title.