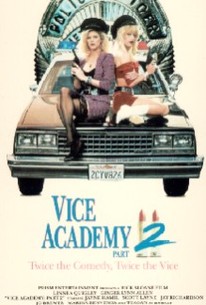 Ginger Lynn Allen and Linnea Quigley reprise their roles as Holly and Didi from the first Vice Academy film, this time chronicling their adventures after finally joining the police force. The two new recruits argue ceaselessly over who is the better officer, though in reality they both make the same dumb mistakes and are equally in hot water after accidentally injuring fellow cop Petrolino (Scott Layne). Demoted to switchboard duty, the girls get another chance to prove their worth when the evil supervillainess Spanish Fly (Toni Alessandrini) threatens to poison the city's water supply with a dangerous aphrodisiac. Since her hideout is rumored to be the Vicerama Strip Club, Holly and Didi are sent there to get jobs and search for clues. Unfortunately, the only position to be filled is bookkeeper, so when the girls arrive in skimpy outfits and proposition the boss, they fail to make the right impression. Luckily, the police force has a new secret weapon that will render police women obsolete: Bimbocop (Teagan Clive), an Amazonian robot who is "half woman, half machine, and all trash!" Bimbocop is assigned to help Holly and Didi save the city from Spanish Fly once and for all. However, this amazing contraption has four settings (Work, Rampage, Overload, and Worthless) and when her controls are tampered with, nothing works out according to plan.

There are no critic reviews yet for Vice Academy Part 2. Keep checking Rotten Tomatoes for updates!

There are no featured audience reviews yet. Click the link below to see what others say about Vice Academy Part 2!