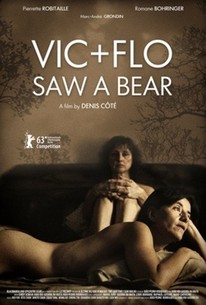 The new feature by Quebecois auteur Denis Côté (director of CARCASSES, CURLING, and BESTIAIRE, among other films, and the subject of an Anthology retrospective in Fall 2012) is a typically well-observed, beautifully-crafted, and shape-shifting piece of work. A filmmaker whose command of the medium has steadily grown throughout his career, Côté delights in defying categories - in films such as CARCASSES and BESTIAIRE he blurs the boundaries between fiction and documentary, while his more explicitly fictional films are tonally unstable, gracefully but unmistakably crossing the line from one genre to another. --(c) Anthology

Ted Pluvoise
as The Lover

Raoul Fortier-Mercier
as The Cadet
View All

Ultimately, "Vic + Flo" becomes both horrific and strangely, surreally beautiful, in a final moment in the afternoon sun.

Côté and his collaborators have crafted an astounding movie that doesn't care about being adored but that certainly demands to be dealt with.

It's all very well to toy with genre elements by making incongruous aesthetic and tonal choices and adding an offbeat sensibility. But the director still needs to make us care about his characters.

The title may sound like a children's book and the bear may be metaphoric, but make no mistake: This is a story with surprisingly great, big teeth.

As Côté dives deeper into these moods, the film turns aggressive and impressionistic, moving from low-key drama to tragicomic fairy tale.

Vic + Flo Saw A Bear strikes a perfect balance of observational apprehension that some of his earlier work seems to overwork in the more formal aspects of his style.

It exists successfully as an enigma, but falters as a gripping character drama. It's like a jigsaw puzzle put together only to show a blank picture.

Vic + Flo Saw A Bear is a very strange film, one that's fully realized yet feels like it can veer off into any direction at a moment's notice.

Both women's performances are excellent, and the setting of rural Quebec is serene.

In the end, the genre-bending of "Vic + Flo Saw a Bear" makes way for a grim romanticism. Vic and Flo's fate is simultaneously terrifying and achingly hopeful.

Even if completely taken at face value, though, Côté pulls no punches by letting you pass your own judgment on those who're left.

There are no featured audience reviews yet. Click the link below to see what others say about Vic+Flo Saw a Bear!