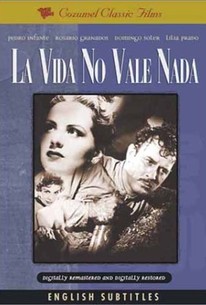 The Spanish language drama La Vida No Vale Nada stars Pedro Infante as Pablo, a stranger new to town who finds work in the antique shop of widow Cruz (Rosario Granados). The two fall in love, even though the local priest makes it clear he believes Pablo is unworthy of her company. Pablo messes up this seemingly idea situation when he goes on a drinking binge and reverts back to the less than honorable ways familiar to him. ~ Perry Seibert, Rovi

There are no critic reviews yet for La Vida No Vale Nada. Keep checking Rotten Tomatoes for updates!

There are no featured reviews for La Vida No Vale Nada at this time.