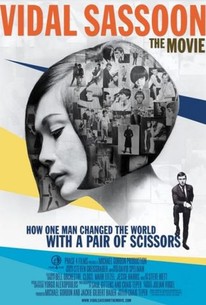 This first-time, deeply intimate look into the life of Vidal Sassoon, from his early days in an orphanage, to his time as a soldier, his beginnings on Bond Street, and ultimately, the revolution he caused, which continues to this day. Vidal Sassoon The Movie was filmed over the course of 3 years and features unprecedented access to Vidal, candid interviews with former staff, family members, reporters and historians. Together they explore the life and legacy of the most influential hairdresser in the world, whose influence far outreaches the industry he changed forever. Millions revere the legend, yet so few know the man. -- (C) Official Site

I could have done with something a little more critical than this polished, adulatory film, which comes over like a curtain raiser to be shown at a gathering of his 10,000 employees worldwide.

The story of "the greatest hairdresser who ever lived" isn't given enough historical context: one of his Sixties contemporaries, designer Mary Quant, is on hand to reminisce, but the rest of the decade is merely a blur in the background.

If Vidal The Movie were a haircut, it would be a peek-a-boo fringe. Now you see him, now you don't.

Though you'd never have anticipated it, Vidal Sassoon emerges as an genuinely likable figure of some substance in this admittedly hagiographic documentary.

Would have been more effective as an hour-long TV doc.

Yes, it's a feature doc about a hairdresser. And you can wipe that supercilious smirk off your face right now.

This tiresome non-fiction film is over packed with employees, former employees and old-time business partners who insist that Sassoon is the most amazing person on the planet.

Lively and enjoyable, even if it seems unwilling to explore any dark corners.

Sassoon deserves this tribute and there are some interesting social insights.

The film feels superficial even for something set in the fashion world, and after chronicling Sassoon's unlikely ascent, it all starts to feel air-kissy and fluffy. There is a great story here, though, and Sassoon is undeniably inspirational.

Stylishly directed and edited, this is an undeniably entertaining and occasionally fascinating documentary about a genuinely intriguing subject.

Sometimes it's the little things that make the largest cultural impact, and Vidal Sassoon shows just how pivotal the work of one ambitious hairdresser can be.

KInd of interesting, especially to show how boring hair is nowadays, but I didn't much care fo rthe subject and his strange, elocution-trained voice. The 80's Vidal & Beverley Sassoon TV series, with white teeth & orange tan was a low point.