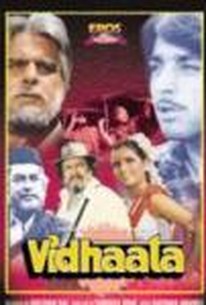 Shamsher Singh (Dilip Kumar) is a very wealthy, poweful, and influential man. His son Pratap Singh (Suresh Oberoi) was tragically killed at a young age, leaving behind a son, Kunal Singh (Sanjay Dutt), who now lives with his grandfather. Also living with Shamsher are a faithful old employee Abu Baba (Sanjeev Kumar), and his brother Gurbaksh Singh. Kunal grows up without any hang-ups, and is attracted to a local young lady, Durga (Padmini Kolhapure), who lives with her mother (Nadira), and are not wealthy. When Kunal takes Durga to introduce her to his granddad, and Abu Baba, Shamsher instantly takes a dislike to Durga, due to her poverty, and asks Durga's mother, not to permit Durga to see nor contact Kunal again. Durga and her mother decide to move out, but are molested. Abu Baba comes to their rescue, and as a result he is killed. Kunal is enraged, and swears to avenge Abu Baba's death. His investigation to the man behind Abu Baba's death leads him to the associates of his grandfather, and subsequently to his grandfather himself, who it seems is living a double life.

There are no critic reviews yet for Vidhaata. Keep checking Rotten Tomatoes for updates!

There are no featured reviews for Vidhaata at this time.